Witnesses of the Birth of Imam Mahdi (a.t.f.s.)
121
post-template-default,single,single-post,postid-121,single-format-standard,bridge-core-2.1.9,ajax_fade,page_not_loaded,,side_area_uncovered_from_content,qode-theme-ver-20.6,qode-theme-bridge,disabled_footer_bottom,qode_header_in_grid,wpb-js-composer js-comp-ver-6.1,vc_responsive

Witnesses of the Birth of Imam Mahdi (a.t.f.s.) 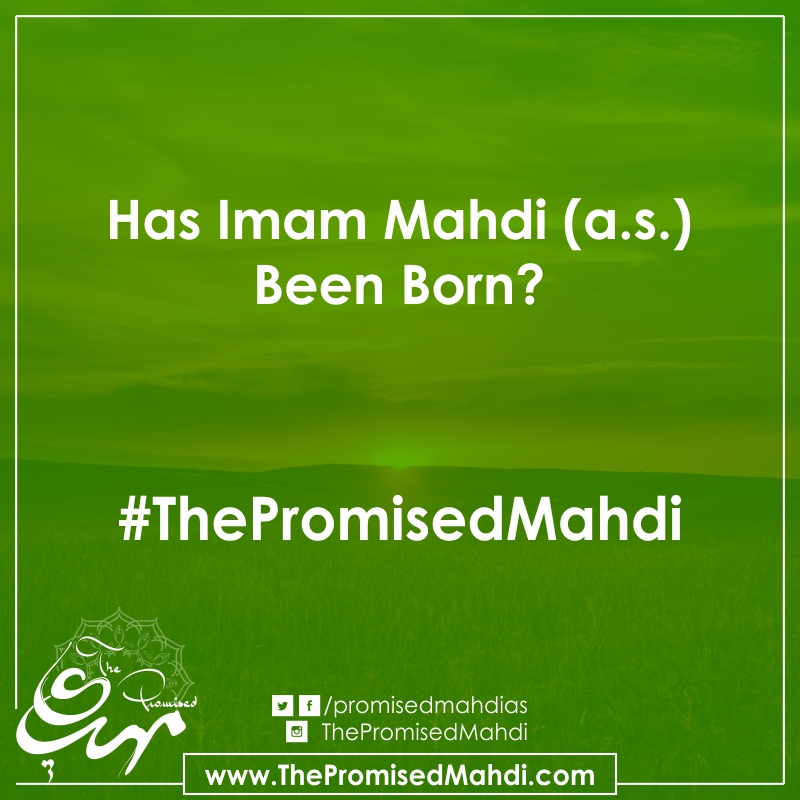 Posted at 16:15h in Articles, Featured by Athar 0 Comments

Various objections have been raised regarding the birth of Imam Mahdi (a.s.). Keeping in mind the necessity for brevity we shall discuss only two types of objections – hoping the sensible people would be able to get the replies to other objections too. First of all is the objection that if the birth of Imam Mahdi (a.s.) has already occurred then a tradition in support of this should be shown to them in the Sahih Bukhari or Sahih Muslim (the two most  popular books of traditions for Sunnis).

They are willing to believe only after seeing such a tradition. Actually this objection is based neither on Shariat nor on reasoning and understanding. Rather, by refusing to believe in the birth of Imam Mahdi (a.s.) they have doubted the power of the Almighty Allah. Apart from this the objection is so foolish that any wise person would feel amused. Why should the Sahih Bukhari and Sahih Muslim be considered the touchstone for proving the veracity of every fact At least they have not demanded the date of birth from the Holy Quran! This objection could be replied to in numerous ways but here it would suffice to give only three replies:

1. The Sahih Bukhari and Sahih Muslim have never been used as a source for the date of birth of any  istorical personality. So much so that these two  ooks are not depended upon even for determining the date of birth of the  Holy Prophet (s.a.w.a.) and the Khulafa-e-Rashedeen (the four Caliphs).  hen why should it be demanded from us to prove the birth of Imam (a.s.)  rom Sahih Bukhari and Sahih Muslim.

2. The date is not mentioned in Sahih Bukhari and Sahih Muslim. Imam Bukhari had not even come into existence in the year 255 A.H. or 256 A.H. so how could he report the birth of Imam Mahdi (a.s.). Although the two authors have compiled in their books the prophecies of the Holy Prophet (s.a.w.a.) regarding the various aspects such as that Mahdi shall be from the Progeny of Janabe Fatema (s.a.), from the descendants of Imam Husain (a.s.), and he shall fill the earth with justice and equity.

Hence, how should we believe in his birth  The witnesses of the birth of Imam (a.s.) shall be described on later in this article.

3. If today we want to confirm the date of birth of a particular person we have to either refer to the Municipality records or the registers of Tehsil or Gram Panchayat. In the same way, to find out the date of birth of Imam Mahdi (a.s.) we have to seek the assistance of the historical registers or in other words, the history books. So if anyone wishes he is requested to peruse the books of any of the unbiased Islamic historians. If he wishes to read the statements of many historians he could refer to the book titled, ” Danish mandaan Aammah wa Mahdi-e-Maood.” This book has 120 historians whose statements have been recorded. The second objection raised by the enemies of Islam and especially the enemies of Imam is that in the Shia books of traditions, there are only two reports with regard to the birth of Mahdi (a.s.). One of the report is of the daughter of Imam Muhammad Taqi (a.s.) Janabe Hakeemah Khatoon and the second report is by the servant of Imam Hasan Askari (a.s.) named Oqaid. The opponents allege that these two witnesses are insufficient because the first narrator is a woman and the testimony of a woman is considered only half in Islam. Secondly, the other narrator is a servant and the poor fellow might have had some misunderstanding. Before replying to this objection one thing is to be mentioned is the lovers of Ahle Bait (a.s.) and the servants of Imam-e-Zaman (a.s.) should take a lesson from the fact that the enemies of Imam had studied so many Shia books and after that ignored the reality have made such an allegation, why should we being the servants of Imam-e-Zaman (a.s.) not learn more and more about Imam Mahdi (a.s.). In order tomaintain brevity the objection has been replied by only the traditions from  he Behaarul Anwaar. If the 51st volume page 2-28 of Behaar is studied, at least 18 narrators of the birth of Imam could be found. Some of their reports are quoted below:

The Testimony of Imam Hasan Askari (a.s.) regarding the birth of the son:

Mualia ibne Muhammad related that Imam Hasan Askari (a.s.) sent to him a ‘tawqee’: “Then, Zubair has been killed. This is what such people deserve. Those who are involved in the scandal mongering about the saints (awliya) of Allah. This Zubair thought that he would murder one in such circumstance that my Progeny would be cut off. See, how the power of Allah has become apparent, and the Proof of Allah has already taken birth.”

Imam Hasan Askari (a.s.) sent a letter; “a son is born, he is kept hidden and
concealed. We have shown him only to the selected people.”

Glad Tidings of the Grandfather regarding his grandson:

“Abul Hasan Imam Ali Naqi (a.s.) said to his sister Hakeema: “O daughter of the Prophet of Allah (s.a.w.a.) you take her (Narjis) to your house and give her instruction about the obligations and recommended acts. For she is the wife of Imam Hasan Askari (a.s.) and the mother of Hazrat Qaem (a.s.)”.

Belief in the utterance of Imam (a.s.) itself is obligatory. Secondly it is mentioned as prophecy. According to the rules of the Arabic language it indicates that the fulfillment of such happening is guaranteed.

The Testimony of the maid servants regarding the son of their master:

It is related through Ibrahim bin Muhammad by Naseem, the maid servant of Imam Hasan Askari (a.s.):

“The next day after the birth of Hazrat Mahdi (a.s.) I went in his presence and I happened to sneeze. Upon this he [Imam-e-Zaman (a.s.)] said “Yarhamak
Allah.”

“When Imam-e-Zaman (a.s.) emerged from the womb of his mother he was kneeling down and his index finger pointed towards the sky. Then Hazrat sneezed and he said, “Al-Hamdo Lillahe Rabbil Aalameen.”

Testimony of the slaves regarding the birth of the son of their master:

“A son was born to Abu Muhammad Imam Hasan Askari (a.s.) whom he named as M-H-M-D. On the third day he took the new born before his companions and said, “After me he is your master and for you he is my successor. This is the Qaem who shall be awaited when the earth is filled with injustice and tyranny, he will fill it with justice and equity.”

Abu Nasr the servant of Imam Hasan Askari (a.s.) reports that I entered in the presence of Imam-e-Zaman (a.s.) He asked for red sandal wood. I brought it. He asked, “Do you know me? I replied, “You are my master and the son of my master. He said, “I am the last of the vicegerents (awsiya).”

Testimony of the companions regarding the son of the Imam:

“Hazrat sent to me four sheep with this letter, “Bismillah hir Rehman nir Raheem. These are from my son Mahdi. You partake of it and also distribute to our Shias.”

“Then Imam Hasan Askari (a.s.) entered with a child (whose face was like a full moon) aged around 3 years upon his shoulders and said, “If his esteem had not been intended I would never have shown him to you. This is my son whose name and Kuniyat is the same as the Holy Prophet (s.a.w.a.).”

Testimony of the one who bought meat from the market:

“On the occasion of the birth, the household celebrated and when the young master began growing up I was ordered to purchase marrow filled bone along with the meat. And I was told that it is for the young master.”

Testimony of those who offered their congratulations upon the birth:

“I presented myself at Samarrah in the presence of Imam Hasan Askari (a.s.) to congratulate him upon the birth of his son.”

The son attending to his father in illness:

Ismail bin Ali Nawbakhti reports, “The son served to the father juice of the berry leaves. Then made him do wuzu for the prayers. Then the ailing father said, “Son, congratulations, you are the Sahibuz-Zaman and Mahdi.”

The son at the funeral of the father:

Ahmed bin Abdulla Hashmi has reported, “I went to the house of Imam Hasan Askari (a.s.) when he left the world. His dead body was taken out. We all 39 people were waiting. Then a child entered. We were taken aback by his majesty. We all performed the funeral prayers behind him.”

Apart from these testimonies there are various things which point towards the birth of Imam Mahdi (a.s.). But they have not been mentioned for the sake of brevity. After reading this short article the readers must have understood that the testimony regarding the birth of Hazrat has not come to us only from Hakeema Khatoon (a.r.) and the slave Oqaid. But if the testimony of these two had not even been there, even then the birth of Hazrat could have been proved beyond any doubt. Lastly let me quote a sentence from a religious scholar which would be one more reply to this objection. It is, “who is nearer to the master than the servant.” Thus the testimony of the servant deserves to be regarded more authentic. And there is no scope for any misunderstanding. May Allah consider all of us in the occultation and even after the reappearance of Imam (a.s.) among his worthless servants.