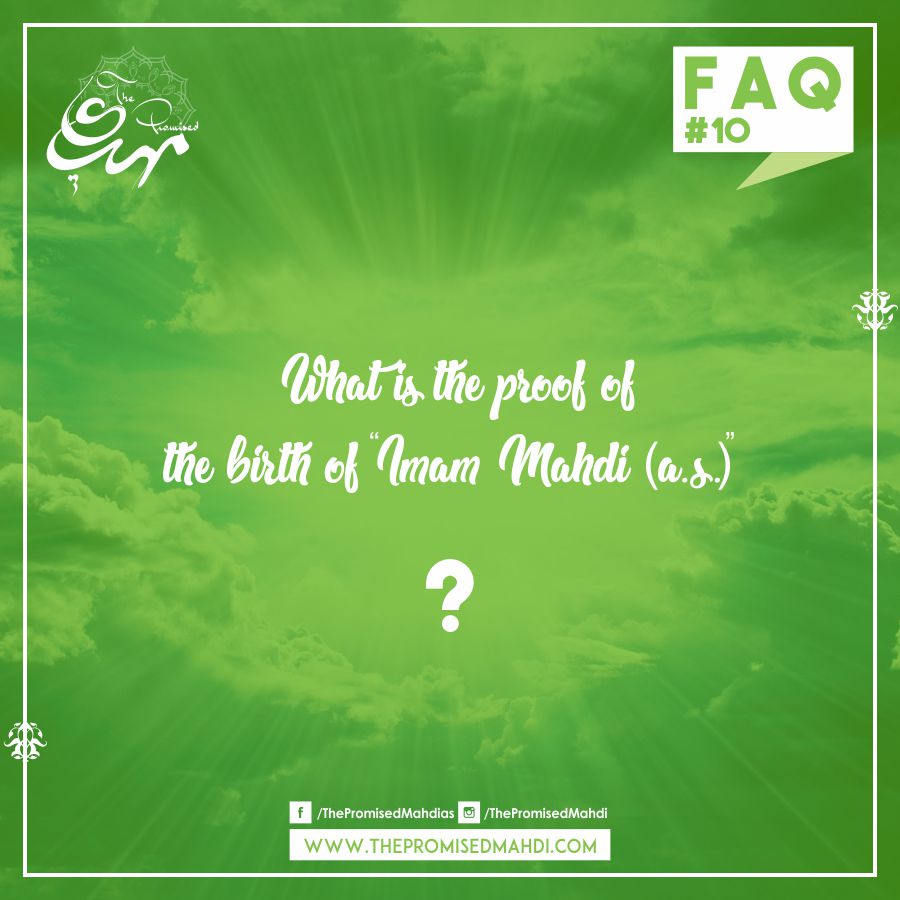 What is the proof of the birth of Imam Mahdi (a.s.)? Whether any one has seen him after his birth?

According to both the Shi’a as well as Sunni historians, Imam e Zamaana (a.t.f.s.) is already born. This is a well established historical fact.

Shaikh Sulaiman Qunduzi says: “According to the authentic reports, Qa’im was born in the night of the 15th of Shabaan in the year 255A.H. in the city of Samarra.”2

misguidance and corruption. They knew that he will be the son of Imam Hasan al-Askari (a.s.). They conspired to extinguish this light. Therefore, right from the day of his birth, his whereabouts were kept secret. So, the people in general could not set eyes on him. But some of the companions of Imam Hasan al-Askari (a.s.) had the honor of visiting him. Few of them have been recorded as follows:

1) Hakimah Khatoon: She was the daughter of Imam Muhammad al-Taqi (a.s.), the sister of Imam ‘Ali Naqi al-Hadi (a.s.) and the aunt of Imam Hasan al- Askari (a.s.). She saw Hazrat Mahdi (a.s.) in the night of his birth itself. Two slave girls Naseem and Maariyah narrate: “When the child was born, he prostrated on the ground and raising the index finger towards the sky, he sneezed and said:

“Praise be to Allah, the Lord of the Universe and blessings of Allah be upon Muhammad and his progeny.”3

2) Abu Basir: He was a servant who said: “I presented myself before Sahebuz Zaman (a.s.) while he was in the cradle. I went near him and did salaam.” Hazrat (a.s.) asked: “Did you recognize me?” He replied: “You are my elder and my leader and the son of my Imam…” Then Imam (a.t.f.s.) said:

“I am the last of the successors and through me difficulties shall be lifted from my family and my Shi’as.”4

3) Saad Ibn Abdullah e Qummi: According to numerous reports, he went to Saamarra for visiting Hazrat Imam Hasan al-Askari (a.s.). He saw a child who was like a luminous moon. On asking about him, he was replied:

4) A group of Shi’as: Once a group of 40 Shi’as came in the presence of the 11th Imam, Imam Hasan al-Askari (a.s.). They asked him to introduce the divine proof after him. Imam (a.s.) accepted their request and introduced to them his son. He emerged as a full moon, resembling his father, Imam Askari (a.s.), who said:

“After me, this son of mine is your Imam and my Caliph among you. You all obey him. Don’t scatter away from his leadership lest you and your religion be destroyed. Also, know that you shall not see him again after today till a very long time. Therefore, you all should obey his representative.”6

5) Abu Sahal Naubakhti: He chronicles: “When he was seriously ill, Imam Askari (a.s.) called for his son to be brought near him. Imam Mahdi (a.t.f.s.), who was a child then, responded accordingly. The son saluted the father. I looked at him. His colour was shining white. His hair was rolled up and curly. His teeth were wide. Imam Hasan (a.s.) addressed him as, “O Chief of the people of his house”. He then asked his help in consuming the medicine which was brewing next to him. He assisted accordingly. Imam Askari (a.s.) performed ablutions and said to his son:

“O my son! You are the Mahdi and the proof of Allah on the earth.”7