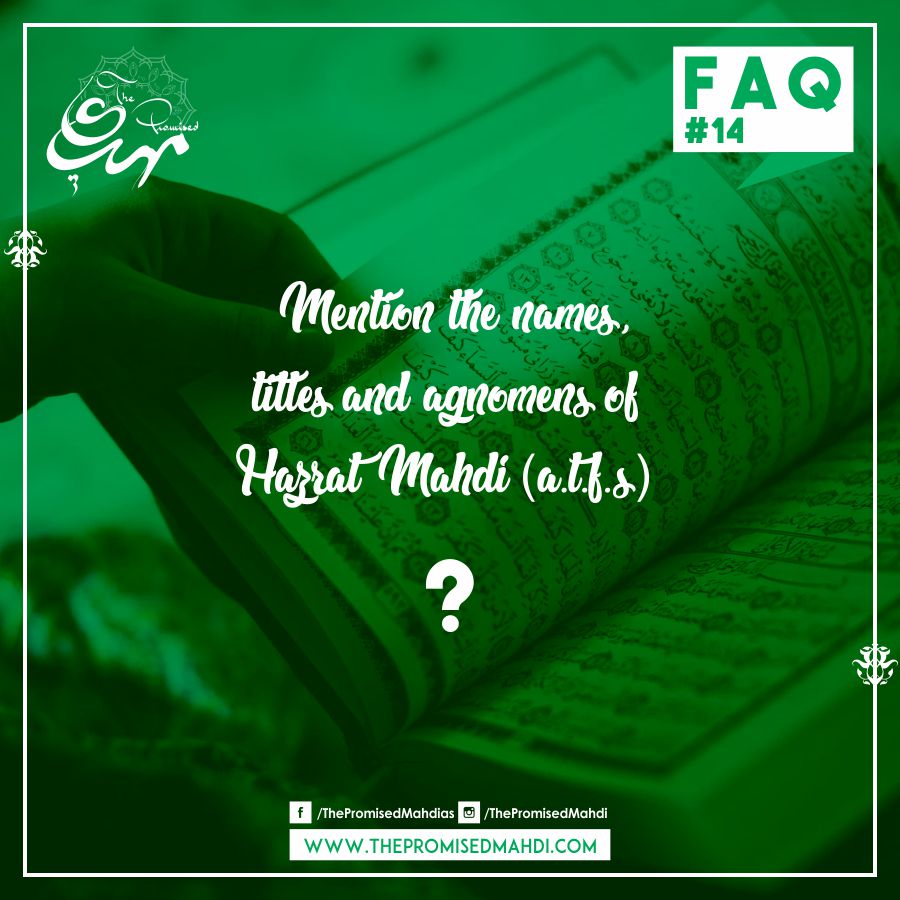 Mention the names, titles and agnomens of Hazrat Mahdi (a.t.f.s)?

This is his most famous title. The word “Mahdi” is derived from the infinitive of guidance and means the one who has been guided by the Almighty. In this context Imam As-Sadiq (a.s.) was asked, “Why is he called al-Mahdi?” He (a.s.) replied:

“Because he will be guided to every hidden affair .”3

Also, it has been narrated from Imam Al-Baqir (a.s.):

“He is named Mahdi as, he will guide to a hidden affair”4

This means the one who will rise with the truth. The Holy Prophet (s.a.w.a.) said:

“Al-Qa’im has been named so because he will rise after the oblivion of his name.”5

“Because he will rise after the oblivion of his name and the refutation of his Imamate by the majority of believers.”6

While explaining the Qur’anic verse:

Regarding the second part of the verse:

“…We have assigned to his heir the authority, so he may not exceed in killing and the one who is helped (Mansoor)” (Surah al-Isra’, 17:35)

“Allah has named the Mahdi, al-Mansur as He has named Ahmad, Muhammad and Mahmood and as Jesus has been named al-Masih”

“Why is he called Muntazar (one who is awaited)?”

“Because the days of his occultation will be prolonged and its duration lengthy, with the sincere ones waiting his reappearance and the doubters denying it……” 7

It has been narrated in traditions that, when Hazrat (a.t.f.s.) will reappear, he (a.s.) will lean against the Kaaba. Three hundred and thirteen of his followers will gather around him from far away places. The first words with which he will address them will be this Qur’anic verse:

He will then say:

“I am the ‘Baqiyatullah’ (the remnant of Allah). I am His proof and His caliph over you all.”

Then all will salute him thus: “Salutations be upon you, O Baqiyatullah in His earth.”8

In addition, he (a.t.f.s) is also addressed by the following titles:

We shall continue the series of these questions in the following volumes, Inshallah.

We pray to Allah, the Almighty, that He hastens the reappearance of our master Hazrat Baqiyatullah al-Azam (a.t.f.s.) and that He enumerates us amongst his followers and helpers. Ameen.