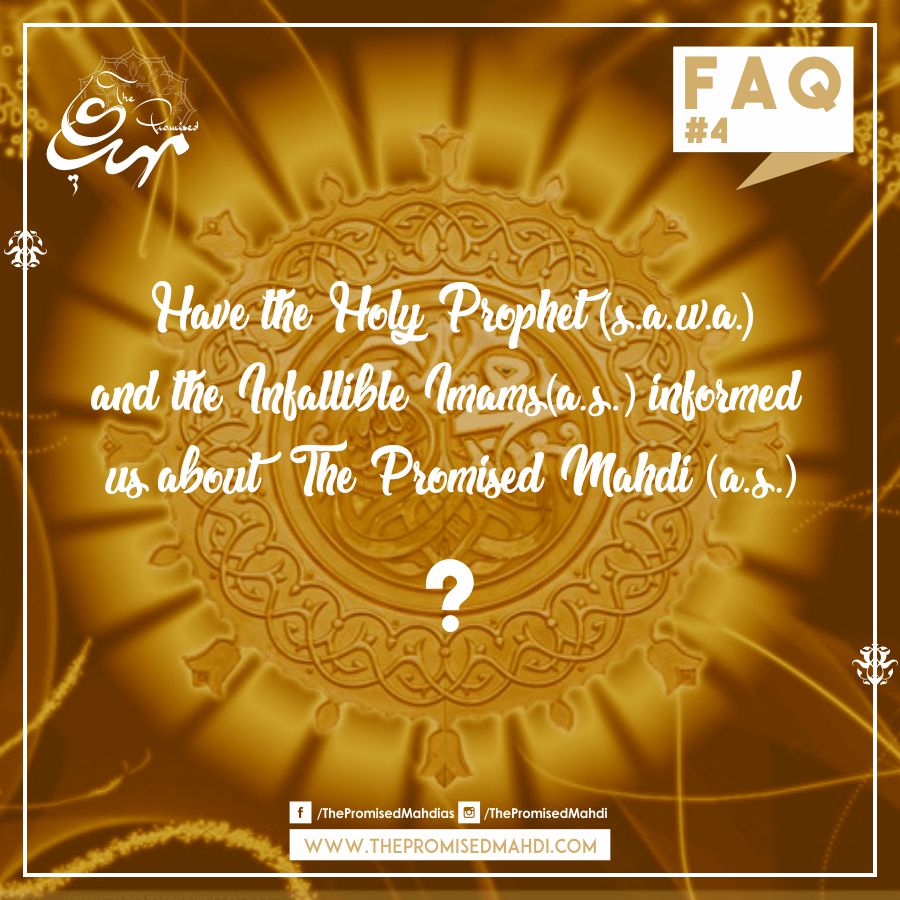 Have the Holy Prophet (s.a.w.a.) and the Infallible Imams (a.s.) informed us about the “Promised Mahdi”?

Many reliably narrated traditions emanate from the Holy Prophet (s.a.w.a.) and the infallible Imams (a.s.) about the existence and reappearance of Hazrat Mahdi (a.s.). These leave no room for any doubt whatsoever for the seekers of truth. Following are some examples of the sayings of these Holy Personalities (a.s.):

The Holy Prophet (s.a.w.a.) informed,
“Mahdi is from my progeny. His name is my name (Muhammad) and his agnomen is my agnomen (Abul Qasim). He resembles me most in the creation and in the manners. He will be associated with occultation and confusion, till most people deviate from religion. He will appear as a bright shining star, will fill the earth with truth and justice just as it was filled with oppression and injustice.”1

“My Qa’im will have a long occultation. I can foresee that our Shi’as in spite of their lifelong efforts to find him will not be able to do so. Know you all that the one who in his occultation is steadfast on his religion and does not deny him in his long absence will be with us on the Day of Judgment.” He (a.s.) then continued: “When my Qa’im reappears he will not have the allegiance of any one on his neck as his birth was hidden and his personality was in Occultation.”2

Once, Jaabir Ibn Abdullah Ansari was present in the service of Hazrat Fatima Zahra (s.a.). Before her was a tablet in which the names of the successors (a.s.) were written. Jaabir says that he counted them and found 12 names, the last of which was “Qa’im”. Three names were “Muhammad” and four “‘Ali”.3

“People are not exempted from the obedience of any of us Imams. Yet, our rights have been trampled upon by oppressive rulers and their followers. This will go on until the time of Qa’im (a.s.), behind whom Prophet Isa Ibn Maryam (a.s.) will pray and whose birth will be kept a secret by Allah. He will be kept in occultation. When he reappears, paying allegiance to him will be compulsory on everyone. He will be a great descendant from the progeny of my brother Husain (a.s.). Allah will lengthen the age of his occultation. By His power, He will make him reappear and when he reappears, his age will seem to be like a man of 40 years or even lesser. Know him, as Allah has power over everything.”4

“The characteristics of one of my descendants is the same as that of Hazrat Yusuf (a.s.) and Hazrat Isa (a.s.). He is the Qa’im from us Ahlul Bayt (a.s.). Allah will transform his condition in one night.”5

“Worse conditions will afflict the world. People shall express differing personal views about the existence of the Qa’im (a.s.). Is he alive or dead? Has he gone towards the desert? His deniers will claim that his bones have decayed. They will thus question the possibility of his reappearance. It is your duty to wait for his reappearance. When the news of his reappearance reaches you, then hasten to reach unto him, even if you have to face thousands of obstacles.”7

“The occultation of our Qa’im will be like that of the Prophets (a.s.). All the characteristics of our Qa’im flow from us Ahlul Bayt (a.s.)…..My son is similar to Hazrat Musa (a.s.). He is the son of the queen of the maidens. His occultation will be such that the wrong doers will be in doubt. Allah will then make him reappear. The entire universe will submit to him. Prophet Isa (a.s.) will appear and pray behind him. The earth will illuminate with his existence and not a piece of land will remain where any one other than Allah will be worshipped. Allah’s religion will be found everywhere, no matter how much the polytheists may detest it.”8

“Al-Qa’im will purify the earth from the enemies of God. He will fill it with justice and equity just as before him it was filled with tyranny and oppression. He is my fifth descendant. He will be in occultation for a long period due to the fear of his life. In that period, many will become deviated from religion. Praised are our followers who remain steadfast on our mastership, are firm on our friendship and on the enmity of our enemies in the period of Qa’im’s occultation. These are from us and we are from them. They are satisfied with our leadership and we are satisfied with them as our followers. Thus congratulations are due to them as Allah will place them with us on the Day of Judgment.”9

“When our Qa’im reappears, he will appear like a youth. His strength will be such that if he extends his hand towards the biggest tree it will be uprooted. The mountains will break up on his pleadings. He will have the staff of Hazrat Musa (a.s.) and the ring of Hazrat Sulaiman (a.s.). He is my fourth descendant. Whomsoever and howsoever Allah wishes, He will conceal him from the eyes of the people. When the Qa’im reappears, he will fill the earth with justice and equity just as previously it was filled with oppression.”10

“Qa’im is our Mahdi, who will guide (the people). It is necessary upon everyone to wait for him in his occultation and obey him when he reappears. By Allah Who raised Hazrat Muhammad Mustafa (s.a.w.a.) for Prophethood and selected us for Imamat, even if a single day remains from the life of this world, Allah will lengthen it to such an extent that our Qa’im reappears and fills the earth with justice when it would be filled with tyranny and oppression.”11

“Who will be my master after you?

“After me, it is my son Hasan. But what will be the condition of the people after him?”

On being asked to explain his concern, he (a.s.) further reasoned:

“As nobody has seen him and it is prohibited to take his name till he reappears and fills the earth with justice just as it was previously filled with tyranny and oppression.”12

“I can foresee your dispute about my successor after me. Beware that if a person believes in Imamat and the past Prophets (a.s.) but denies my son, then his example is as if he believes in all Prophets but denies the Prophethood of Hazrat Muhammad Mustafa (s.a.w.a.). If someone denies the Prophethood of the last Prophet (s.a.w.a.) after believing in all the Prophets (a.s.), he is like the one who obeys our first but denies the last. (His obedience is just as necessary as the obedience to all of us.) One who denies our first infallible is like the one who denies our last.”13