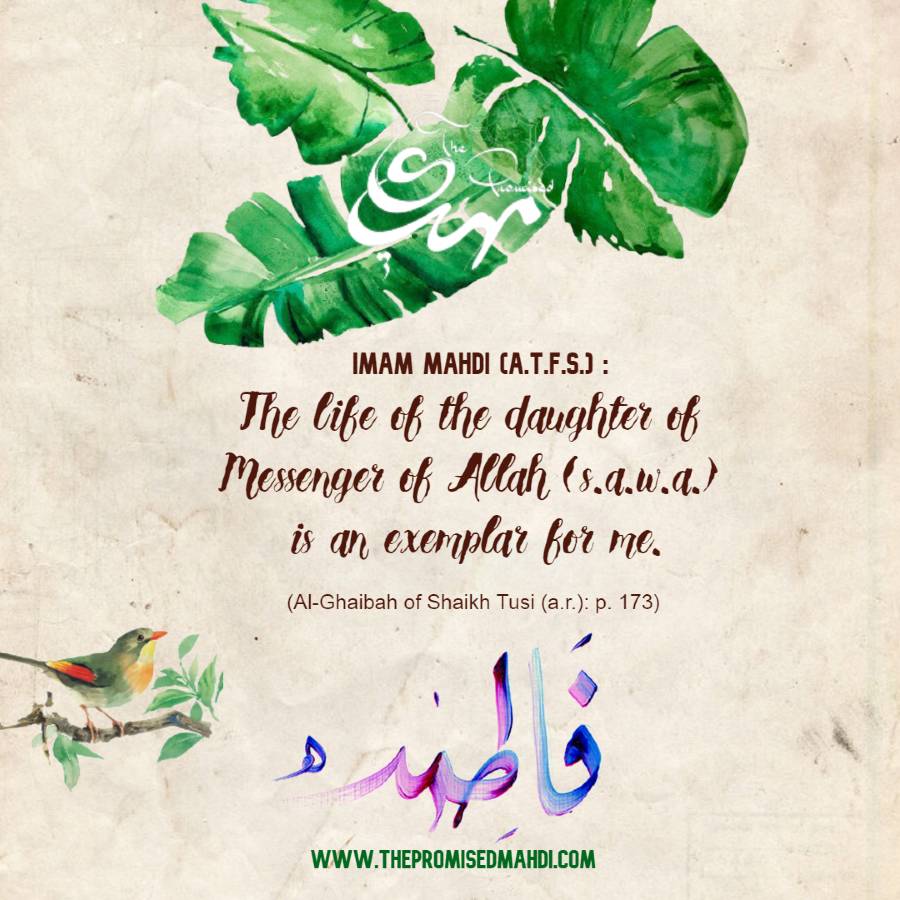 In one tradition the Holy Prophet (s.a.w.a.) addressed Janabe Zahra (s.a.): “Certainly Allah is angered by your anger and is pleased with your satisfaction. Whoever hurts you has hurt me and whoever has enraged you has enraged me and whatever troubles you, troubles me.”

Hazrat Imam Ja’far Sadiq (a.s.) narrates the exegesis of Surah Qadr in the following way: “The night of grandeur (Lailatul Qadr) – here the night refers to Janabe Zahra (s.a.). while Qadr refers to the true recognition of Janabe Zahra (s.a.) one who attains it, has attained the night of grandeur. Janabe Fatema (s.a.) is referred as Fatema because the creation will never be able to reach to her cognition.”

In another tradition Imam Sadiq (a.s.) said: “The night of grandeur is better than a thousand months” refers to Janabe Fatema Zahra (s.a.). “The angels and the spirit descend in it” refer to the believers who possess knowledge of the progeny of Holy Prophet (s.a.w.a.). “And the spirit” refers to Ruhool Qudus i.e. Janabe Fatema (s.a.). “From all the affairs” refer to everything which is considered complete. “Till the break of the morning” means till the reappearance of Qaem (a.t.f.s.).

Janabe Zahra (s.a.) and the night of grandeur

2.   Just as the night of grandeur is one of the three nights, similarly the grave of Janabe Zahra (s.a.) is at either of the three places (Jannatul Baqi, between the grave of the Holy Prophet (s.a.) and his pulpit or in her house)

3.   All the affairs are declared in the night of grandeur. Just as every action is explained in a detailed way, similarly the personality of Janabe Zahra (s.a.) is the scale to measure between truth and falsehood. It differentiates between a Muslim and a disbeliever, a believer and a hypocrite.

6.   The night of grandeur is the centre of all the affluences, perfections, bounties and blessings. Janabe Zahra (s.a.) is the reason for all the blessings being showered towards the earth and all calamities are warded off due to her.

7.   Night of grandeur is better than a thousand nights, while Janabe Zahra (s.a.) is the chief and better than all the women – first and the last

8.   The night of grandeur also has a strong relation to Imam Zamana (a.t.f.s.). This night is an evidence of his presence and life. Surah Qadr and Surah Dukhaan mention about ‘all affairs’. In this night, Allah sends down all the affairs through the angels. When the angels descend with the command of Allah, it is necessary that there is a ‘master of affairs’ and ‘possessor of affairs’ who receives these affairs and sends it to the people.  The love and recognition of Janabe Zahra (s.a.) is the reason for appreciating the night of grandeur and descending of the affair of Allah is the proof of existence of Imam Mahdi (a.s.)

Now let us ponder on these traditions

A Christian once came in the presence of Imam Musa Kazim (a.s.) and asked a few questions. One of the questions was regarding the first few verses of Surah Dukhaan. He said, “Tell me about the book which was revealed upon Mohammad (s.a.w.a.) through which Allah has conversed and narrated His attributes and perfections which are as follows:  Haa Meem. I swear by the Book that makes manifest (the truth). Surely We revealed it on a blessed night surely We are ever warning. Therein every wise affair is made distinct.

Imam (a.s.) said: ‘Haa Meem’ refers to H. Mohammad Mustafa (s.a.w.a.). It has been mentioned this way in the book of Janabe Hud (the first meem and daal has been omitted). ‘The clear book’ refers to Imam Ali (a.s.). The ‘night’ refers to Janabe Fatema Zahra (a.s.). ‘Wise affair is made distinct’ refers to abundant goodness. It implies a series of wise men – each one following the other.”

In this tradition the night of grandeur refers to Hazrat Fatema Zahra (s.a.). Imam Mohammad Baqir (a.s.) said: “O Shias! You must use Surah Qadr as evidence and an argument. You will certainly be successful (in debating with your opponents). By Allah! It is the proof of Allah upon you after the Messenger of Allah (s.a.w.a.). Certainly this Surah is the basis and chief of religion and is the peak of our knowledge. O Shias! You debate with the people taking the help of Surah Dukhaan. This Surah is specific to those in authority (Ulool Amr) after the Holy Prophet (s.a.w.a.)”

Ameerul Momineen Ali Ibn Abi Talib (a.s.) said: “Every year has the night of grandeur and in this night the affairs of entire year are sent down. These affairs are handed to the ‘the one possessing the authority’ after Holy Prophet (s.a.w.a.).” Ibn Abbas questioned: Who are these? He (a.s.) said: I and eleven Imams from my progeny.”

Hence, in relation to the night of grandeur Janabe Zahra (s.a.) has a special attachment with her son, Imam Mahdi (a.t.f.s.). The love and recognition of one of them is the night of grandeur while the affairs are descended in the presence of the other through which Allah’s mercy reaches the people. Whoever is not a follower of the mastership and leadership of these great personalities will be devoid of the blessings of this night and whose heart is brimming with their mastership and leadership can succeed in any phase of life through their confirmation. He can ward off any difficulty and there will never be any instance of despair and dejection for him. This is the reason that all those who benefited from the bounties of Ahle Bait (a.s.) are safe from the curses of terrorism, intimidation and suicide bombing.