Posted at 12:39h in Articles, Meetings And Miracles by Athar

This incident is reported on pages 149-154 of the book Shiftaane’ Hazrat Imam Mahdi (a.s.) Haji Mohammed Ali Fashandi was a resident of Iran. He narrates his meeting with Imame’ Zaman (a.s.) as follows-

In my youth I had decided that I would raise my level of piety to that extent that when I would travel for Hajj to Makkah, I would get a opportunity to meet Imame’ Zaman (a.s.) Therefore with this intention, I would travel for Hajj every year to Makkah. In one particular year, I went for Hajj. This year, I was having the responsibility of a few Hajis on me. On the eve of 8th Zilhajj, I decided to gather all my belongings and items and go to the ground of Arafat so that I would be able to prepare and book a good place for my companions when they would arrive the next day. 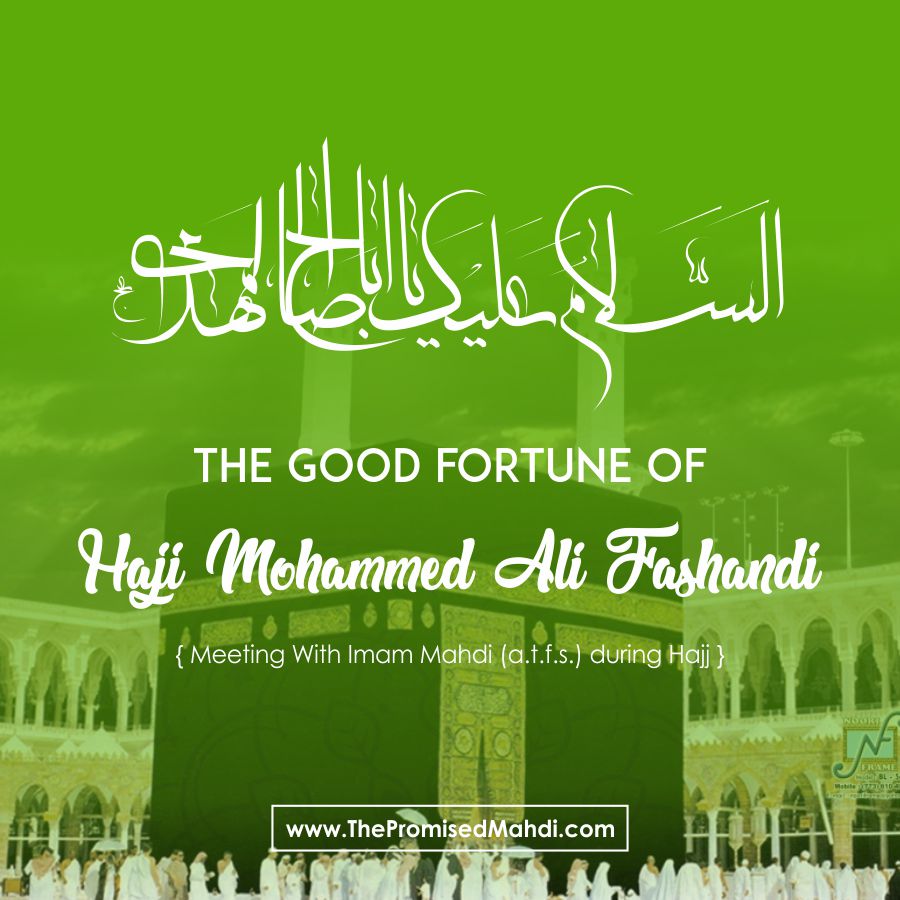 At the ground of Arafat, I was able to book a tent and keep all my belonging there. I was aware that at that time, there was no one in Arafat other than myself. There was a guard at the entrance of the tent and he came to me and said, “Why have you come here today? Do you not know that you are alone here? Your belonging could be stolen by thieves who operate in this area. In any case since you have come here, It is better that you remain awake the entire night and guard your belongings.” I said, “No problem. I will remain awake till morning and guard my possessions.”

I remained awake in the night and made myself busy in prayers and duas. It was towards midnight that my attention was drawn towards a respected Sayyed who was wearing a green turban. He came towards my tent and called out to me by my name. He said, “Haji Mohammed Ali, salaam alaykum!”

I got up from my place and after replaying to his salaam we entered the tent. After some time, we were joined by some of his young companions who stood outside the tent in readiness to serve him (a.s.). I was overcome with fear, but after a few second of talking with him, my heart was filled with his love and I began to trust him. His companions continued to stand outside while their Sayyed was inside the tent.

He replied, “You have remained awake in the night in the ground of Arafat. My respected father Hazrat Imam Hussain (a.s.) also remained awake when he spent his night at Arafat.” I asked, “What should one do in this night?” He replied, “Recite two units of prayer such that in every unit, after Surah Hamd, recite Surah Tawheed 11 times.”

We got up form our place and I prayed the namaz as per the instructions along with the respected Sayyed. After completing the namaz, he recited a dua, which I had never heard before. I was really very fortunate. Tears were flowing from my eyes and I was trying to memorize every word of this dua. The respected Sayyed saw this and said, “This dua is for the Infallible Imams (a.s.) Even if you memorise this dua, you will not be able to retain it in your memory.”

I turned to him and said, “If you don’t mind, can you inform me whether my belief in Tawheed is correct or not?” He said, “Go ahead, tell me about your belief.” I began narrating Ayaate’ Aafaqi and Anfosi and presenting them as proofs for the existence of Allah. He said, “These proofs are sufficient for you for your belief in Allah.” Then I presented before him my belief in Nabuwwat (prophethood) along with the wilayat (Mastership) of Imam (a.s.). He said, “Your beliefs in nabuwwat and Imamat are very good.”

I asked, “tomorrow which is the eve of the Day of Arafat, will Imame’ Zaman (a.s.) come into the tents of the believers and cast his mercy upon them?” He said, “Tomorrow, he (a.s.) will come into your tent because he will present your case before my uncle, Hazrat Abul Fazl Abbas (a.s.) and make him your intercessor.” At this moment the respected Sayyed said,

“Haji Mohammed Ali, do you have some tea with you?” At this question, I realised that I had brought everything with me except for some teabags.

Then he said to me, “Haji Mohammed Ali, I will give you 100 Rials. I would like you to perform an Umrah for my respected father.” I agreed and asked him the name of his respected father?” He said, “the name of my father is Hasan (a.s.).” I asked, “What is your name?” He replied, “Mahdi (a.s.)!” I took the money and then the respected Sayyed got up to leave. I raised my hand to touch his robe, embraced him and wanted to kiss him. As I came close to kiss him, I saw a black mole on his right cheek, which added to his handsome features. I kissed the black mole.

After he left, I looked in the ground of Arafat, but could see no one there. I suddenly realized that the person with me all this time as none other than the 12th Imam Hazrat Baqiyatullah (a.s.). He was aware of my name. He spoke to me in Persian, my mother tongue. He said his name to be Mahdi (a.s.). He said that his father’s name was Hasan (Askari) (a.s.)! Finally I sat down and began crying uncontrollably. The guards in the area thought that some thieves might have come and stolen my belongings. They gathered around me. I told them that I was praying some dua and hence I was crying.

That night we recited the evening namaz at its time. I had not informed my companions of the promise of Imame’ Zaman (a.s.) that he would visit our tent as we would seek intercession from Hazrat Abul Fazl Abbas (a.s.). The speaker on his own began reciting the Masaeb of Hazrat Abul Fazl Abbas (a.s.). The atmosphere was charged with emotion and all of us were crying out aloud. I was especially waiting to welcome Imame’ Zaman (a.s.).

At the majlis was coming to an end, I steadied myself, got up from my place and came outside the tent. I saw hat Imame’ Zaman (a.s.) was standing outside the tent and was hearing the masaeb recite by the speaker about Hazrat Abul Fazl Abbas (a.s.). He was also crying. I thought that maybe I should call everybody and tell then that, look, Imame’ Zaman (a.s.) himself is here, but he (a.s.) made a sign indicating that I should not do so. At this, I realized that my tongue had lost its capacity to speak. My body was rooted to the ground such that I could not take a single step towards him. After the majlis was completed, Imam (a.s.) also went away and then my condition was restored.

This incident teaches us that during the days of Hajj, Imam (a.s.) is present in the ground of Arafat. Often the organizers of Hajj tours are unable to spend much time for worship, as they are busy arranging for the comfort of the pilgrims. This action is liked by Imame’ Zaman (a.s.) and if one performs it with sincerity, it is possible that he is blessed with the visit of Imame’ Zaman (a.s.)

On the day of Arafat, recitation of the “Dua on the Day of Arafat” by Imam Hussain carries great reward. And one can increase it by remembering the masaeb of Hazrat Abul Fazl Abbas (a.s.). During the time of Hajj, when we perform on action which is liked by Imame’ Zaman (a.s.) in our tent, it is possible that he (a.s.) blesses us with his (a.s.) visit.

If one is blessed with a visitation from Imame’ Zaman (a.s.), It is not necessary that we call everybody to benefit from it. If Imam (a.s.) wishes that all were blessed with his visit, then he (a.s.) will inform us accordingly.

It is the wish of Imam (a.s.) that the Hajis after fulfilling their obligations towards Hajj, perform an Umrah Mufredah for his (a.s.) father, Imam Hasan Askari (a.s.). Imam (a.s.) wants to show us that it is the duty of every son that after the death of his father, he performs such actions, which will benefit his father in the Hereafter.