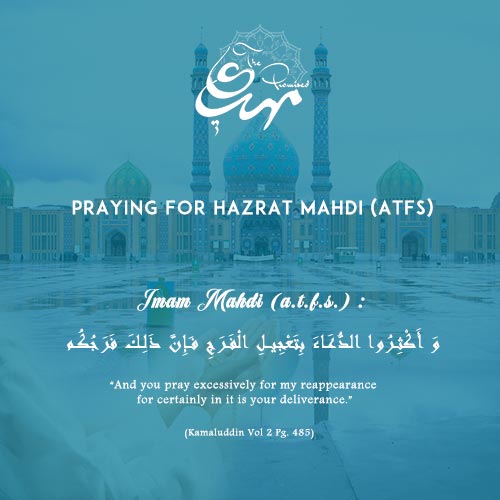 Posted at 17:06h in Articles by The Promised Mahdi Team

Islam is the religion that is based on nature and it is very natural for two people to love each other. This relationship of love then makes them sacrifice for each other. They also prefer to be in each other’s company. When these two lovers are separated, they long for each other and pray to be in each other’s company again. Such is the case with a Shia who has love in his heart for his father, his master Hazrat e Vali e Asr (a.t.f.s.) with whom he has been separated. Since it is the destiny of Allah, he accepts it but longs for his Imam. He prays for his early reappearance as his master has himself ordered him such:

“And you pray excessively for my reappearance for certainly in it is your deliverance.”

There are some special occasions when a believer becomes naturally distressed and thus more eager to meet his beloved. On such occasions when he raises his hands for prayers, the first prayer that he invariably whispers, is for the reappearance of Imam Zamana (a.t.f.s.). Some of these occasions are the Day of Ashura, 15th  of Shabaan, the Day of Ghadeer, Eid ul Fitr etc. However, as Imam(as) has ordered to excessively pray for him, the prayers have to be more frequent. Let us therefore remind ourselves about those times and occasions when we can fulfill this responsibility more regularly and frequently.

In Qunoot of Daily Prayers

There are many Qunoots available in various books where our previous Imams have prayed for Imam e Zamana (atfs). These are quite lengthy and so let us suffice with few sentences taken from them.

Imam Zainul Abedeen (as) recites: …Replace their leaders with the Shia Imam and replace them with just and fair Shia people in their place. Light the way for the fire of the truth, bring about the ones who are looking for justice and revenge of the Imam’s blood. Strengthen the seeker of justice and fairness with Your Might… (Muhajj ad-Dawaat, Pg. 49)

Imam Baqir (as) recites: …O Allah, make nearer what has come near and make us reach what is near and make our hopes realized and make the aspirations of believers true; and help Your religion. And make Your proof evident and take revenge from Your enemies making it fruitful… (Muhajj ad-Dawaat, Pg. 51)

We may not be able to memorize these or read them regularly in our prayers. However, we realize that praying for Imam e Asr (a.t.f.s.) in Qunoot is a way of his illustrious forefathers. We can therefore include in our Qunoot the recitation of  Allahumma Kun le waliyek…… or any other Dua for his early reappearance.

In the beginning and last part of every day

The lovers of Imam Mahdi(a.t.f.s.) start their days by reciting Dua e Ahad for him. It is mentioned that one who recites this supplication for 40 days will get the opportunity of rising from his grave at the time of the reappearance of Hazrat Mahdi(a.t.f.s.). He would then help Imam in the great task of establishment of Justice and equity in this world.

It is narrated in Bihar ul Anwar Vol 86 Pg. 340 that there is a Dua to be recited at the end of the day for Wali e Asr (a.t.f.s.). Some of its sentences are as follows

I ask You, by the right of Your Wali, the righteous successor, Your survivor in Your earth, Your avenger from Your adversaries and the adversaries of Your prophets and his righteous forefathers – Muhammad bin al-Hasan(atfs) – and to make You satisfied by it and present to You as a request that You bless Muhammad and the progeny of Muhammad.

As a Muntazir of Imam e Zamana (a.t.f.s.), when we finish our day and we see that Yusuf e Zahra has not reappeared we should be sad and go to bed by remembering and praying for his reappearance.

Before praying for ourselves and our families.

The month of Ramadhan

The Holy Prophet (s.a.w.s.) in his famous sermon on welcoming the month of Ramazan, introduces this month as the one in which prayers are accepted. This Holy month comprises of various occasions when the prayers are accepted viz. at the time of Seher, Iftar and the Night of Destiny. We should therefore, pray for his Holy reappearance at these times

There is a special Dua for this month quoted in Iqbal and Zaadul Maad from the fourth Imam, Imam Zainul Abideen (a.s.) and his son, Imam Muhammad Baqir (a.s.) which begins as follows:

The illustrious personality of Muhammad Ibne Yaqoob Kulaini (a.r.) has recorded in the Chapter of Fasting, in Usool Kafi about the prayers to be recited on the 23rd night of Mahe Ramzan. He mentions from reliable sources that on this important night in the condition of standing, sitting and prostration one must go on reciting the dua  of Allahumma Kun le waliyek……as much as possible.

Another occasion in which it is emphasized to pray for early reappearance is the position of prostration. As per Imamite traditions, it is the most proximate position to Almighty Allah.  Therefore, the best thing to mention in it should be the most important matter. And what is more important for a lover of Imam than his reappearance?  When we are performing the prostration of thanksgiving, shouldn’t we yearn and remember the Almighty’s most important Bounty and that is the holy personality of Hazrat Mahdi(a.t.f.s.)? It is due to him that we receive all our bounties. We must also know that to pray for one, who is the cause of blessings reaching us and the medium thereof, is the best way to render thanks to him (a.t.f.s.)

Nights and Days of Friday

Of course, in addition to what is mentioned above the Nights and Days of Fridays also are specifically connected to Imam Mahdi(a.t.f.s.). Friday mornings are for crying for our master by reciting Dua e Nudba. There is a special salutation to Imam Mahdi(a.t.f.s) on Fridays which his lovers should not forsake. It is on Friday that he will reappear and after that there will be no excuse for anyone to leave the Friday Prayers

May Allah give us the good fortune for praying for Hazrat e Vali e Asr (a.t.f.s.) at all times. Ilahi Ameen