The Meaning of the title of Imam e Zaman (a.s.) 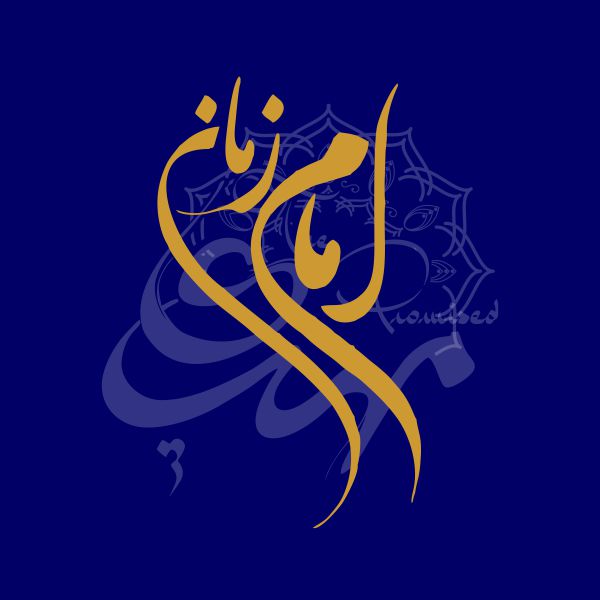 THE MEANING OF THE TITLE OF IMAM E ZAMAN (A.S.)

Nowadays such instances are extremely numerous where this dictum rarely comes true. The titles are some times promiscuous bestowed without knowing the actual meaning by the patrons and by the patronized which is out of context here.

The Prophets of Allah are familiar by the titles added with their names which throw light on their probity and innate qualities endowed in them by the creator. The prophet Moosa (a.s.) is addressed as “Kaleem-Ullah” as he had conversation with the Creator of the world, while our last prophet as is specifically mentioned in the Holy Book is known as Rehmatullil Aalameen – the one whose existence is a source and fountain of blessings in this world and in the world hereafter. Likewise his progeny is also profusely blessed.

Those who are fond of reciting prayers (Dua) not only for consecration and happiness but with a view to attain and get mastery of the philosophy and high ideals taught by the descendents of the Holy Prophet (s.a.w.a), are fully aware of innumerable titles of Imam-e-Zaman (a.s.) mentioned in those prayers (Dua). In this context, Dua Nudba and Ziyarat-e-Ale-Yasin etc deserve special attention. All those Dua are collected and have found place in Mafateehul Jinan. In this article we will throw light in detail only on one title – Imam-e-Zaman (a.s.) In our prayers (Dua) and in day to day conversation this assumed name is directly and closely linked with our exalted Imam Mahdi (a.s.). No sooner as we hear or utter this noble appellation attention is at once drawn t« the Awaited Imam (a.s.). Imam-e-Zaman, Imam-e-Asr, Saheb-e-Asr and Vali-e-Asr are all synonyms and directly attached with the last Savior. We have become accustomed to hear them but have never bothered to know the facts related with them. It is because of this reason that doubts are germinating in our minds. Once the actual meaning is grasped our minds will never be clouded with such notions.

This assumed name is combination of two words, first is Imam, Saheb and Wali while the second is Zaman and Asr. An Imam is called so as he is always ahead of every body except God while others are always behind. He always leads while others are directed and guided by him.This particular point becomes clear when we pray together (Namaz-e-Jamaat) where all the gesture of Imam are strictly followed by his followers. When he performs “Rukoo” it is copied as it is by his followers, when he prostrates they also prostrate. In short an Imam holds sway over his followers but not the follower over the Imam. Saheb and Wali mean master and commander. So the followers are dictated by the master.

We address him as Imam-e- Zaman not due to conviction in regard to religion. It is based on facts and has solid foundations and thick back ground. Zaman means the sphere of existence or the whole creation. All the creatures except God are covered in this sphere and nothing under the sky and on earth is beyond the sphere of existence.
The above exegesis explains that the whole creation – the earth, the sky, the moon and the stars, is in the domain of Hazrat Mahdi (a.s.). The universe is in motion at his instance. The time can be changed by him and not he by the time and environment.

After the revelation of these facts one can understand easily the secret of Imam’s longevity and youthful exuberance. All the creatures have to go beyond the frontiers of life to the great unknown first by jumping in the vanguard of youth and then to the tail end of the life called old age by evolutions but the Imam (a.s.) is undisputedly invariable with this evolution and would remain young.

The above points are supported by the Holy Quran in Surah Asr which runs as follows: “I swear by the Time; Surely man is in loss. Except those who believed and did good deeds and advise for the truth and advise for the patience”.

Whatever gain and loss is mentioned in the above Surah are for the individuals to face in the hereafter those who are indulging in all the vices; enjoying the colorful life and doing things which are out of tune with the spirit of the religion. Imam-e-Asr (a.s.), Vali-e- Asr (a.s.) and other spiritual leaders (Imams) are undoubtedly above all those things, though they lived and are living in this world. Such type of question can never be raised in the mind against them.

A question that generally pricks the minds of the people is that a being who is high in place of excellence and whose grandeur is beyond the imagination of mankind and for whom this world inspite of all its vastness and attractions is nothing but trash why then such a being with all sublimity is kept out of view?

Among all the Prophets of Allah, the foremost and the last is Hazrat Mohammad Mustafa (s.a.w.a.) who came into being to elevate the minds and to place the mankind in an honored position. The mission was accomplished to a greater extent in his life time but the wholesome results could not be achieved inspite of the struggle of his predecessors due to intrigues, so the very purpose of his teaching and preaching to place the mankind could not be achieved as desired. The re¬appearance of our last savior is motivated with an object to fulfill the un accomplished mission of the last Prophet of Islam. “The Awaited ” one would fill the world with justice as it was full of tyranny and oppressions.” So his noble existence is meant to achieve a destined end.

It is now evident that Imam (a.s.) is root (base) and the world is the tree spread in branches. Imam (a.s.) is before all others in time while the world is last in time. It is a folly to treat it as exaggeration. It is because of him the world exists and the creatures owe their subsistence to him only. He is the source of subsistence for the destitute. The sky and the earth also owe their sustenance to him.

To keep this point ever green in memory, it would not be out of way to repeat the narrations of Ayatullah Waheed Khurasani referred to him by Mirza Ahmed son of Akhund Khurasani the author of “Kefayat”. He narrates that” my mother was unwell. Day by day her illness was getting worse. We were very much puzzled. The doctors were in a fix. One day we received the news of the arrival of an elderly person in Najaf-e-Ashraf expert in astronomy. My brother Mirza Mohammad and I went to him and met him in the Holy tomb of Hazrat Amir-al-Momineen (a.s.). We told him that we have come to inquire about an urgent thing from him. We will concentrate on that problem conscientiously and you give the reply. The elderly man moved the heads of rosary and said that the disease had spread all over the body of the patient for whom they came to enquire from him. The chance of recovery is very less and within a day or two the patient would die. Our intention was to inquire about the reason of illness of our mother. Second time my brother thought conscientiously and requested the saint to tell about it. The heads of rosary were again moved by him but his facial expression suddenly changed. This process was thrice repeated and all the three times he seemed to be much worried.
He then said that the man about whom they wanted to know was first seen in Lebanon and then was found in Kaba, now he is found in Medina . He moved once again the beads of rosary said that I have witnessed that the sun was circling around his head and he is Imam-e- Zaman (a.s.).
This point is pertinent as the Imam (a.s.) is the centre of the universe so the sun has to circle around him. Today we are living in the domain of such a noble and exalted Imam (a.s.). It is a pity that we are claiming to be his followers but have departed from the ways dictated and directed by him. If we are sincere in claiming to be his followers, we must be attached to him spiritually to free ourselves from the hardship of this world and the world hereafter.