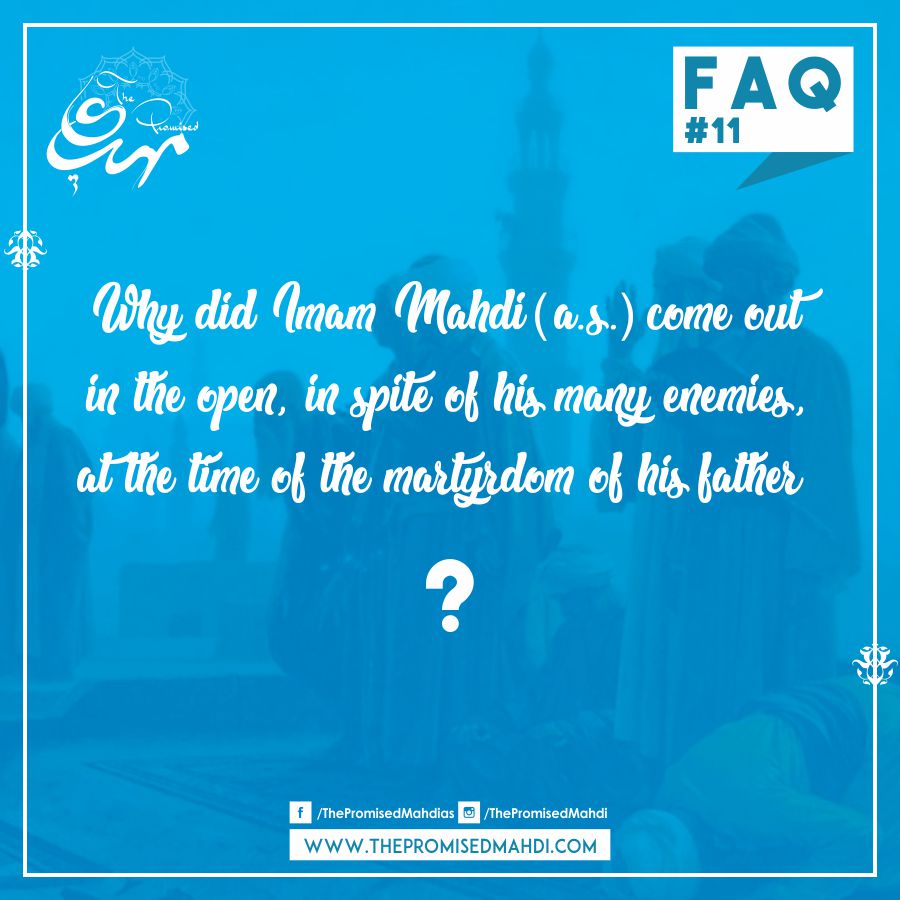 Why did Imam Mahdi (a.s.) come out in the open, in spite of his many enemies, at the time of the martyrdom of his father?

As has been explained previously that due to the exceptional conditions of that time, except a very select group none had seen Imam Mahdi (a.s.). These selective meetings continued till the day of the demise of the eleventh Imam (a.s.). That is, the eight of Rabee’ al- Awwal, 260 A.H. On this day, perhaps due to four reasons, Imam Mahdi (a.s.) revealed himself to all and was present in the burial ceremonies of his honourable father, Imam Askari (a.s.) along with his assembly of relatives. These possible reasons were as follows:

2) To prevent any representative of the Caliph from reciting the funeral prayers over the holy bier of the eleventh Imam (a.s.), announcing the termination of the flow of Imamat and introducing the tyrant Abbaside Caliph as the Imam of the Shiites.

3) To prevent corruption from entering the proceedings of the matter of Imamat. Jaafar, the son of Imam ‘Ali al-Hadi (a.s.) and the brother of Imam Askari (a.s.) had an evil stratagem to claim the position of Imamat. He had come with an intention to lead the funeral prayers on the bier of the martyred Imam (a.s.).

4) For verifying the continuation of the true chain of Imamat and Islamic Mastership. To announce to the believers in Imamat that after Imam Hasan al-Askari (a.s.), there is the twelfth Imam responsible for spiritual successorship, the Islamic message and religious as well as worldly mastership. He has been born and is very much present.1

The Abbasids now knew that this is the era when, the annihilator of the oppressors, the subsider of the tyrants, and the avenger of the blood of the oppressed has been born and is very much present amongst them.