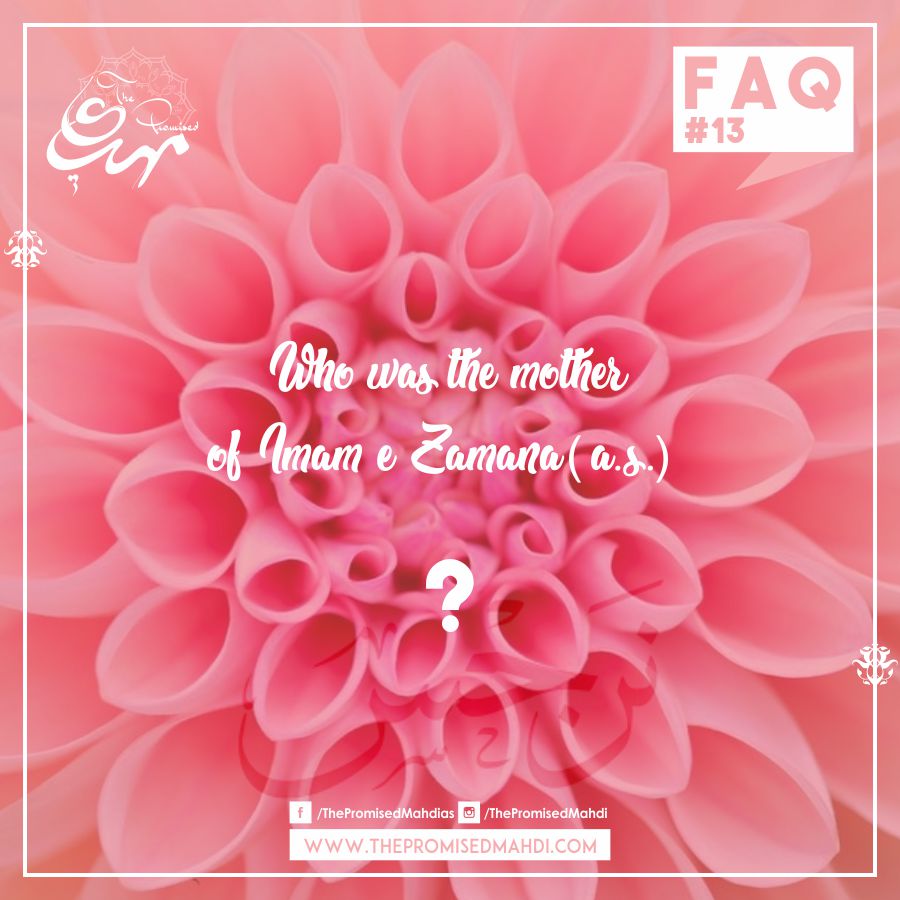 The Mother of Imam-e-Zamana (a.s.) was a Roman princess Narjis Khatoon. She is introduced in the following narration of Behaarul Anwar, v. 51, Chapter 1, H. No. 12.

“Sahl al-Shaybani narrates, ‘Bishr ibn Sulaiman al-Nakhkhaas, a descendant of Abu Ayyub Ansari and a devotee of Abu al-Hasan (a.s.) and Abu Muhammad (a.s.) and their neighbor at Saamarraa, Kafur, the servant came to me and said, “Our Master Abu al-Hasan Ali Ibn Muhammad (a.s.) is calling you.’ I went to the Master and as I sat in front of him, he said,

“O Bishr, you are from the descendants of the Ansaar. This devotion is your legacy, which each coming generation of yours inherits from your preceding generation. You are the trusted ones of us Ahle Bait (a.s.). I am elevating you and ennobling you by an excellence through which you will surpass all Shiites in devotion, by sharing a secret with you and sending you to purchase a certain bondmaid.”

He then wrote a very fine letter in Roman script and Roman language and imprinted his seal on it. He took out a yellow cloth wherein were two hundred gold coins. He said, “Take this and go to Baghdad.” He told me to go to the crossing of theEuphrates on noon of such and such day and when I reach the boats of the captives, he said,

“You will see bondmaids in them. You will find buyers working for the procurers of the Abbasids and a small group from the Arab youths. When you see that keep an eye on a man called Umar ibn Yazid al-Nakhkhas from a distance all day long, until a bondmaid with the described qualities is brought to the buyers.”

… At that moment go to Amr Ibn Yazid al-Nakhkhas and tell him you have a kind-hearted letter from a certain man of nobility, which he has written in Roman language and in Roman script, describing therein his benevolence, his fidelity, his excellence, and his generosity, so she may discern from it the character of its author. Should she be interested in him and choose him, then I am his representative in buying her from you.”

Bishr Ibn Sulayman says, “I did all that which my Master Abu al-Hasan (a.s.) had ordered me to do with respect to the bondmaid. When she saw the epistle, she cried profusely and said to Amr Ibn Yazid, “Sell me to the author of this letter.” She took the solemnest of oaths that should he refuse to sell her to him, she will take her life.

I negotiated the price with the dealer until it settled exactly on the amount of dinars my Master had given me. The money being sufficient, I took the bondmaid, who was extremely happy and joyous. I returned with her to my residence inBaghdad. She was very restless until she took out from her pocket the letter of our Master. She would kiss it and put it on her eyes and place it on her cheeks and touch it to her body. Astonished, I said, “You are kissing a letter whose author is unknown to you!”

“O unaware of the position of the progeny of Prophets (a.s.),” she responded. “Lend me your ears and empty your heart for my words. I am Malika, the daughter of Yashua, son of the Caesar of Rome. My mother is from the descendants of the disciples (Hawaariyyoon) of Jesus, and her lineage goes back to the successor of Jesus, Sham’oon. I will narrate to you the wonderful story. My grandfather, the Caesar (ofRome), wanted me to marry his nephew when I was a thirteen years of age. So, he gathered in his palace three hundred priests and monks from the descendants of the Hawaariyyoon, and from their men of stature seven hundred men. He gathered four thousand men from the commanders of the army and officers of the military and leaders of the armed forces and chiefs of the tribes. He erected a throne from the dearest of his riches, which was studded with varieties of jewels and was raised over forty steps.

When his nephew climbed, the crosses were fixed about, the bishops took their stands in great reverence, and the pages of the Bible were opened, suddenly the crosses collapsed from the top and hit the ground. The pillars of the throne crumbled and crashed onto the floor. My grandfather’s nephew, who had risen over the throne, fell down and became unconscious. The colours of the bishops changed and their chests trembled. Their leader said to my grandfather, ‘Please excuse me from facing this evil, which forebodes the demise of the Christian religion and the regal creed.’

“My grandfather took this as an evil omen and said to the bishops, ‘Erect these scaffolds, raise the crosses and bring the brother of this deceased man, whose dreams have been ruined, so I may marry him to this young girl; so the evil of his dead brother may go away through his good-fortune.’

“When they did that, the same thing happened to the second prospective groom as had happened to the first. People dispersed. My grandfather the Caesar stood in great distress and entered the quarters of the womenfolk. I dropped the curtains and the same night dreamt that Prophet Jesus (a.s.), Sham’un (a.s.) and a number of disciples (Hawaariyyoon) had gathered at my grandfather’s palace. They had installed a pulpit of light that was defying the heavens in height. It was the same spot where my grandfather had installed his throne. At this, Muhammad (s.a.w.a.), his son in law and successor the Prince of the Believers (a.s.) and a number of his sons (a.s.) entered. Prophet Jesus (a.s.) went forward and embraced him. Muhammad (s.a.w.a.) said to him, ‘O Ruhallah, I have come to you to propose to your successor Sham’un for his daughter Malika for this son of mine’, pointing towards his son Abu Muhammad (Imam Hasan al-Askari) (a.s.), the son of the writer of this epistle. Prophet Jesus (a.s.) looked at Sham’un (a.s.) and said, ‘The greatest honor has come to you. Let your relation be bonded with the relation of the house of Muhammad (s.a.w.a.).’

“Sham’un said, ‘It will be my honor to do so.’ He climbed the pulpit. Muhammad (s.a.w.a.) performed the rituals and married me to his son. Prophet Jesus (a.s.), the sons of Muhammad (s.a.w.a.) and the disciples bore witness. When I woke up, I was scared to report this to my father or grandfather, fearing they will kill me. I kept this a secret and did not reveal it to them. Meanwhile, my heart longed for Abu Muhammad (a.s.) so much that I forsook eating and drinking. I became weak and became lean and sickly. There was no physician in the cities ofRome(modern dayItaly) that my grandfather did not consult for my treatment. When despair overwhelmed him, he said to me, ‘O solace of my heart, do you have any wish that I may fulfil it?’” I said, ‘Grandfather, I see the doors of relief shut on me. However, if you save the Muslim captives in your prison torture, remove their manacles, favour them and kindly release them, I am hopeful that Prophet Jesus (a.s.) and his mother (a.s.) will give me health.’

When he did that, I made an effort to show good recovery and ate a little food. This made him very happy and he became ever intense to confer kindness and respect upon the captives.

“I also saw in my dreams for fourteen nights the Chief of the women of the worlds, Hazrat Fatimah (a.s.). She visited me along with Mary (a.s.), the daughter of ‘Imran, and one thousand serfs from the Gardens. Mary says to me, “This is the Chief of the ladies (a.s.), the mother of your husband Abu Muhammad, (a.s.).’ I held her, cried and complained why Abu Muhammad (a.s.) did not come to visit me. The Chief of the ladies (a.s.) said, ‘…If you desire the pleasure of Allah, the Exalted, and the pleasure of Prophet Jesus (a.s.) and his mother (a.s.), and to have Abu Muhammad (a.s.) visit you, say, I bear witness that there is no deity other than Allah and that my father Muhammad is the Messenger of Allah.’

Bishr says, “I said to her, ‘How did you fall amongst the captives?’”

She said, “Abu Muhammad (a.s.) told me on one of the nights, ‘Your grandfather will shortly be dispatching an army to fight the Muslims on such and such day, and he will follow them. You have to join them in the wardrobe of servants along with a number of servants from such and such route. I did that and the vanguards of the Muslims encountered us, which led to my situation that you see. None knows that I am the granddaughter of the Roman Caesar until now except you and that is because I told you. The gentleman in whose share of booty I fell, asked me of my name. I concealed my identity from him and said, ‘Narjis’. He said, ‘A name of the servants.’ I said to her, “It is amazing that you are Roman and your language is Arabic.”

She said, “Due to my grandfather’s persistence and encouragement to increase my learning, he appointed a woman, who was his interpreter, to visit me. She would come to me day and night and teach me Arabic until I became fluent and articulate.”

Bishr says, “When I brought her back to Saamarraa, I entered upon my Master Abu al Hasan (a.s.). He said to her, “How did Allah show you the Glory of Islam and disgrace of Christianity and the nobility of Muhammad and his Household?” She said, “How would I describe, O son of the Messenger of Allah, something which you know better than me?” “I would like to confer kindness on you.” He said to her, “Which one is dearer to you, ten thousand gold coins or a happy tiding of eternal grandeur?” “Happy tidings of a son for me,” she said. “Rejoice the tidings of a son who will rule the world, from the East to the West, and will fill the earth with equity and justice as it would be fraught with oppression and corruption.” “From whom?” she asked. From the one for whom the Messenger of Allah (s.a.w.a.) proposed for you on such and such night, in such and such year, replied my Master in Roman. He said, “To whom Jesus and his successor married you.” “From your son Abu Muhammad (a.s.)?” she asked. Do you know him?” “Has there been a night he has not visited me since I have embraced Islam at the hands of the Chief of the Ladies!”

Our Master said, “Kafur, call my sister Hakimah.” And when she entered, he said to her, “Here she is.” Lady Hakimah embraced her and was delighted to see her. Abu al–Hasan (a.s.) said to her,

“O daughter of the Messenger of Allah, take her to your house and teach her the duties and the traditions, for she is the wife of Abu Muhammad (a.s.) and the mother of al-Qaim (a.t.f.s.).”