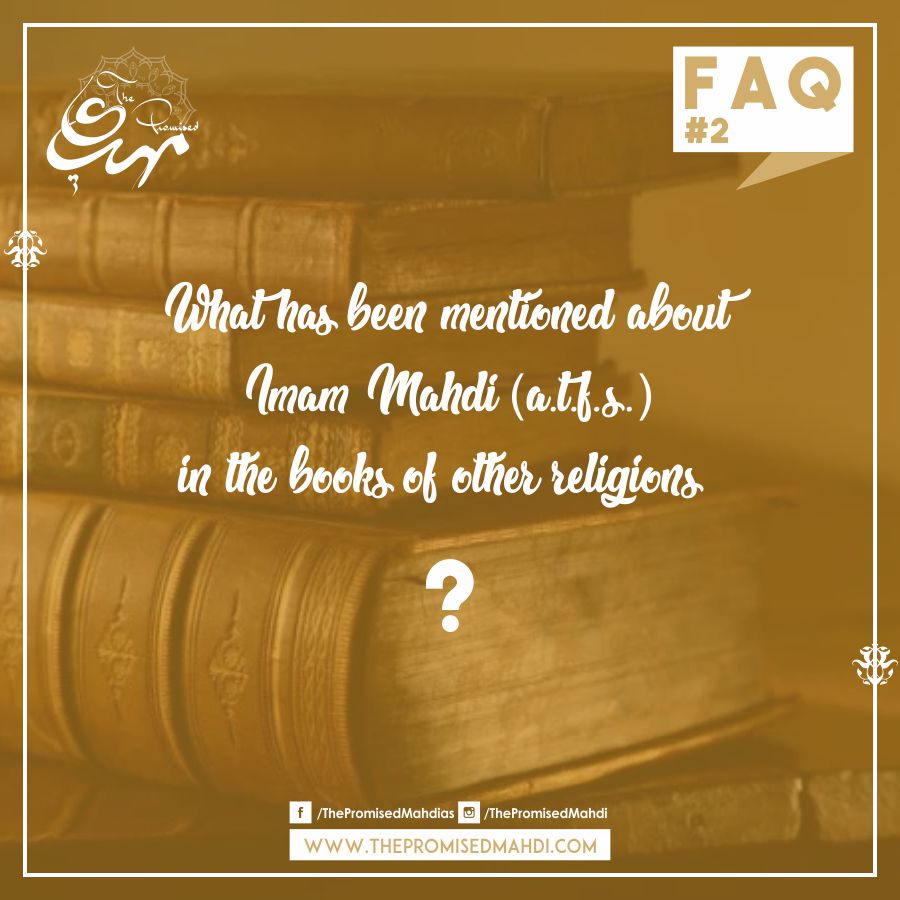 What has been mentioned about Imam Mahdi (a.t.f.s.) in the books of other religions?

An examination of the religious books of the different religions conclusively proves that the belief in the Promised Mahdi is not exclusive only to the Muslims. Even other religions have this belief as is illustrated:

1) Kitab us Zind the religious book of the Parsis mentions about the end of Injustice and the victory of the righteous as follows:

“There is a constant conflict between the armies of Ahreman and Yazdan for supremacy in the land. Though mostly Ahreman is victorious yet Yazdan is never fully vanquished such that neither he nor his progeny remain. In difficulties, he receives help from God (Avarmazd) as he is His son. Thus, their war will go on for 9000 years until finally Yazdan receives a great victory. Ahreman’s army will be defeated and no trace of his followers will remain in the heavens and the earth. Following the complete defeat of Ahreman and the conclusive victory of Yazdan the world will progress towards its perfection and happiness. Men will enjoy lasting peace and victory.”[1]

In the book Jamsabnaamah it is mentions that: “In the land of Taziyaan, from the progeny of Bani Hashim, a person will rise. He will possess a large head, a husky voice, and long shins. He will follow the religion of his ancestors. He will come to Persia with a big army. He will enliven the land with justice and equity.”

At another place it is mentioned: “The Great Reformer will spread the religion in the Land. He will eradicate poverty and scarcity. He will successfully support Yazdan against Ahreman. He will lead humanity through an ethical, moral and intellectual revolution”.

2) Shakmuni is considered as an intellectual in Indian Mythology. He is also believed to be a messenger and a possessor of divine communication. He describes the spiritual leader of humanity thus: “In those days there will be a religion (All worldly authority will terminate in the hands of the son of the leader of the two worlds Jamnad Kishan). The mountains of the east and the west will be under his authority. He will travel on the clouds. The angels will be his servants. Men and Jinn all will submit to him. His rule will spread in the lands of the east and the west and even beyond the oceans. There will be only one divine religion. Divine religion will be enlivened and everyone will believe and have recognition of only one God.[2]

The Vedas which is considered as the divine book of the Hindus record thus: “After the world suffers heavy destruction, a King will appear in the Last Age. He will be called “the Helped One” and will be a Universal Leader. He will rule on the entire world and will collect all people on one religion. He will recognize every person from the believers as well as the disbelievers. He will be the one who actualizes God’s will.

In the Old Testament, it is written that: “Let your waist be girded and your lamps burning. Be like men watching for their lord, when he returns from the marriage feast; that, when he comes and knocks, they may immediately open to him. Blessed are those servants, whom the lord will find watching when he comes….. Therefore be ready also, for the Son of Man is coming in an hour that you don’t expect him.” (Luke 12:35-36)

In the Old Testament, the divine book of the Jews, it is mentioned that; “A shoot will come up from the stump of Jesse; from his roots a branch will bear fruit. The Spirit of the LORD will rest on him…… with righteousness he will judge the needy, with justice he will give decisions for the poor of the earth. …… The wolf will live with the lamb, the leopard will lie down with the goat, the calf and the lion and the yearling together; and a little child will lead them. The cow will feed with the bear, their young will lie down together, and the lion will eat straw like the ox. The infant will play near the lair of the cobra and put his hand into it. They will neither harm nor destroy on all my holy mountain, for the earth will be full of the knowledge of the LORD as the waters cover the sea.” (Isaiah 11:1-10)

5) In the Psalms, it is mentioned that: “For evil men will be cut off, but those who hope in the LORD will inherit the land. A little while, and the wicked will be no more; though you look for them, they will not be found. But the meek will inherit the land and enjoy great peace.” (Psalm 37: 9-12)