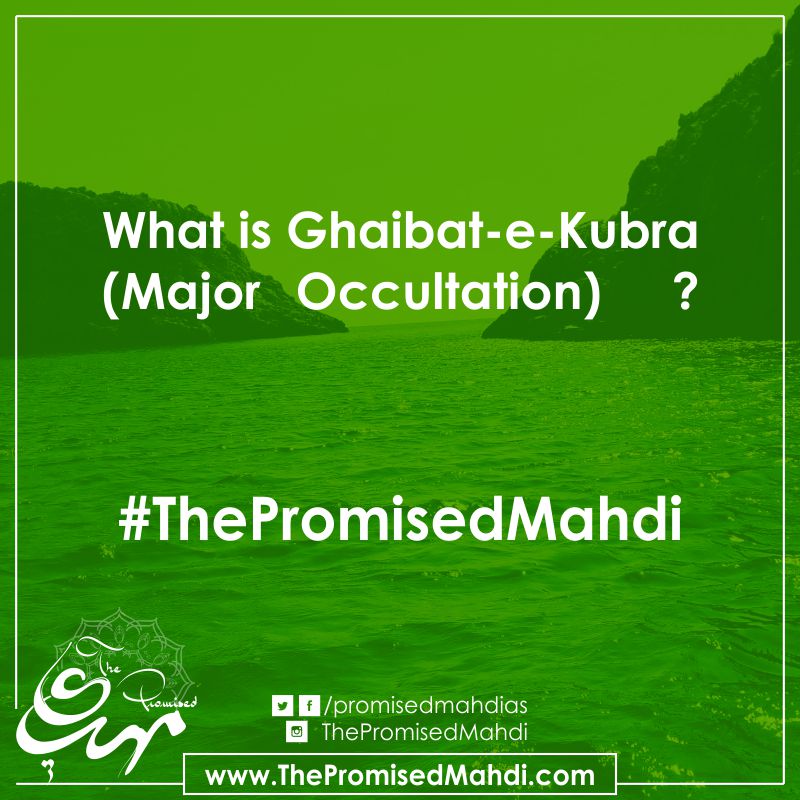 Posted at 13:28h in Articles, Featured, Occultation by Athar

The major occultation began after the death of Ali bin Muhammad Samari in 328 A.H. and the point of referral and general deputyship of His Eminence, the Master of the Age (a.s) reached the great jurists. Throughout the period of the major occultation attention and written communications have come from His Eminence, to the prominent and knowledgeable Shia personalities. For example, that great personality sent a few letters to the great scholar and leader, Shaykh Mufeed from his side, which were received by Shaykh Mufeed, and we shall quote two of these letters in the coming posts. Similarly it has been proved by widely related reports that some pious and righteous Shia persons were blessed with the audience of His Eminence and its details shall be stated in the forthcoming posts.

A group of hypocrites and deviated people claimed that they were the deputies of the Awaited Imam (a.s). Their root cause was either jealousy with the honorable emissaries of His Eminence or they intended to usurp the monies dispatched by the Shias for the Imam (a.s). By way of examples we shall mention a few of such claimants below:

He replied, “I have not heard about his deputyship openly and clearly.”

They told him, “Though you have not heard, other reliable and trustworthy people have heard it.”

He said, “Your hearing is for you.”

Some of the claims of Karkhi and his written statements prove that he had departed from religion and denied some necessary principles of faith.

When the denial of Ahmad bin Karkhi became public knowledge, Imam (a.s) became aloof from him and an epistle was received from him containing curse on Ahmad bin Hilal:

“We seek aloofness from Ibne Hilal from the Almighty Allah. May Allah not have mercy on him and those who do not seek aloofness from him. Then convey this matter to Ishaqi and his townspeople and inform about this sinner man and also whoever who has inquired about it or would inquire from you in the future.”

But Hasan Sharii was a liar and a Dajjal (mischief-maker) and was formerly a companion of His Eminence, Imam Hadi (a.s) and Imam Hasan Askari (a.s) and later he became an apostate. He claimed to be the holder of the venerable position of the deputyship of His Eminence, Imam Mahdi (a.s). And he attributed those things to the Holy Imams did not befit them. Those great personalities dissociated themselves from him. Therefore the Shias have also sought aloofness from him and cursed him. His Eminence has also cursed him in one of his blessed epistles.

Husain bin Mansur al-Hallaj was another liar, deviant and misguider from truth who claimed deputyship of His Eminence, the Awaited Imam (a.s). And he requested the prominent Shias to accept his deputyship. Therefore he sent a letter to Abu Sahl Nawbakhti and desired from him that he join him and promised to give him a lot of wealth.

Nawbakhti replied, “I am a person who is fond of bondmaids but my old age is an obstacle in my enjoyments. Every Friday I am compelled to dye my grey hair. So it would be very nice if you can make me needless of hair dye, save me from this expense and also make my beard black. If you do this I shall become your follower and it would also prove the veracity of your claim! Consequently I would become your greatest companion and propagator.”

Hallaj was perplexed by this demand of Nawbakhti and this incident became public knowledge. It became a topic of great amusement while the deceit and deviation of Hallaj became clear for the people.

An example of Hallaj’s fraud is as follows: He invited an intelligent person to dinner. When he arrived at his place, Hallaj told him,

“If I stretch my hands towards the river, I could catch a live fish from there.”

Then he went into the room and came back with a big live fish in his hands and presented it to his guest saying,
“This is my miracle.”

“This is my miracle.”

Hallaj was shocked and hastily expelled the guest from his house because he had detected his fraud.

Hallaj used to pose himself to be very pious and religious. He was seen in the mountains of Isfahan wearing tattered clothes and carrying a water-skin and a walking stick.

Another fraud of Husain bin Mansur

He had instructed some of his disciples to conceal a quantity of sweet meat and bread at a particular spot in the desert. Then he took along some people with him and with his companions went to that same desert. When he reached that place, his disciple used to remark,

“How nice it would have been if we had got bread and Halwa (sweet) right now, so that we could have enjoyed it.”

At that time Hallaj would recede to a corner and pray two units of prayer and supplicate the Lord for bread and Halwa for the people. His disciple would intentionally wait for sometime as if waiting for the acceptance of prayers. Then he used to go to that place where bread and Halwa was buried and announce,

“We have received this bread and Halwa as a result of the prayer of Hallaj.”

Many gullible people used to be influenced by this fraud and it seemed to be an unnatural phenomenon and a miracle and they used to become such zealous disciple of his that they even sought his urine as means of cure.

It is said that Hallaj also claimed divinity and one of his writing says as follows,

“If one fasts for three days continuously without breaking it and then breaks it with three leaves of Chicory, the Almighty Allah would forever exempt him from keeping the fasts of the month of Ramadan! And anyone who recites a two-rakat (unit) prayer from sunset till the next morning, Allah would make him needless of prayer. One who donates all of ones property on a single day in charity would gain exemption from performing Hajj. And one who stays at the graves of martyrs in the Quraish cemetery for ten days, praying and fasting and breaking the fast only with some barley bread and salt he would be made needless of worship and obedience of Allah.”

Hallaj is credited with having started many innovations. His activities were reported to the Abbaside Caliph, Muqtadir, who had him arrested and executed in 309 A.H.

Muhammad bin Ali Shalmaghani, popularly known as Ibne Abil Gharaqar was a moderate for a long time and had no sort of deviation. But after that due to jealousy towards Shaykh Abul Qasim Husain bin Ruh, the special deputy of His Eminence, Imam Mahdi (a.s), he became deviated and he left the religion of Ahle Bayt (a.s), aligning himself with some debased sects. Some of the principles of those sects were: No kind of worship act was obligatory and every kind of adultery between people of prohibited degree as well as others was allowed. Also, that every person of high social class should marry a spouse of a lower class so that he may induct effulgence into them.

An epistle was issued by His Eminence, the Master of the Age, containing curse on Shalmaghani and stating his dissociation from him.

When the innovations of Shalmaghani became known to all, the ruler of that time had him executed in Baghdad in 323 A.H.

Some of the above false claimants and Dajjals of the period of minor occultation came into being due to their jealousy towards the special deputyship of the Imam of the time, and considered themselves to be deprived of that exalted position and that’s why they resorted to such fraudulent claims.