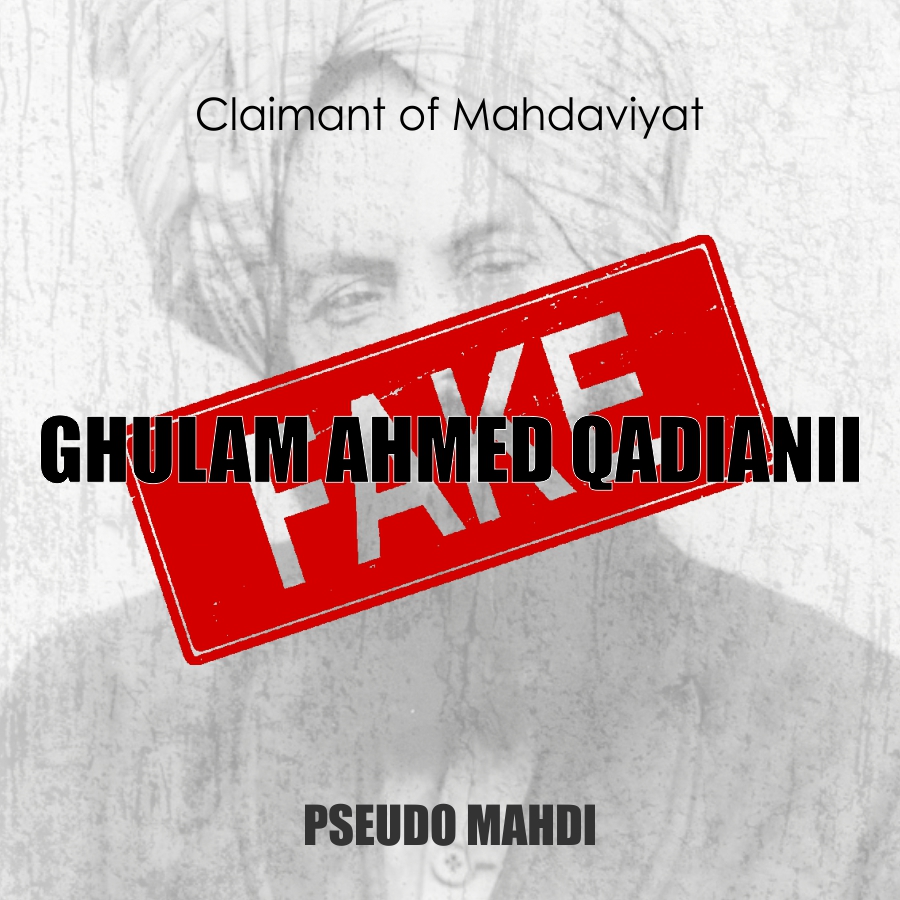 Qadianism is the name of a sect which came into the existence at the outset of the twentieth century in the northern part of India with the help and connivance of imperialist Britain. The founder of this sect was a descendant of Mogul lineage viz. Ghulam Ahmed Qadiani (exp. 1908). He was an ordinary Sunni who took undue advantage of the turmoil and chaotic conditions prevalent in the country and in the year 1891, he claimed that he himself is The Promised Mahdi (A.S.) and Hazrat Isa (A.S.). Later in 1900 he also claimed prophethood.

The Muslim scholars and intellectuals have successfully exposed and unearthed the falsehood of Qadianism and particularly the claim of prophethood because, since the inception of Islam, all Muslims firmly believe that Hazrat Mohammad Mustafa (S.A.) is the last prophet of Islam.

As a result, in 1336 A.H. the great savants and scholars of 25 cities in a reply to a question declared that this sect is infidel and out of the realm of Islam. Similarly in the international conference of Rabita-al-Alam-al-Islami which was held in Rabi-ul-Awwal of 1394 (April 1974) in Mecca and which was attended by the learned scholars of 144 countries, passed a unanimous verdict that Qadianism is not an Islamic sect and undoubtedly termed it as infidel.

Since a lot of books have been written in refutation of the claim of prophethood and which are also easily available hence in this article, we will confine our discussion to the claim of Mahdaviyat, so that these pseudo-Mahdis could be unmasked.

The baseless claim of Ghulam Ahmed regarding Mahdaviyat could be briefly summarized in three points.

It has been stated in the traditions that Hazrat Mahdi (A.S.) will reappear in the fourteenth century.

Ghulam Ahmed Qadiani himself is Hazrat Mahdi (A.S.) and he is himself Hazrat Isa (A.S.).

These things are not only against the holy Quran and reliable traditions but are also contrary to the proven beliefs of all the sects and branches of Ahle-Sunnat. These points shall be scrutinized in the following paragraphs and their hollowness will be explained in due course.

“The Hour (Qiyamat) will not arrive unless a man from my Ahle Bait wil I not achieve rulership, whose name will be same as mine.”

Hence the name of Hazrat Mahdi (A.S.) is Mohammad and not Isa.

2)      Hazrat Mahdi (A.S.) is an Arab and from the clan of Quraish. He is from the progeny of the
Holy Prophet (S.A.) and a descendant of Hazrat Ali (A.S.) and Janab Fatema Zahra (S.A.). There are numerous authentic traditions even in this context. This narration is so widely known that a great Tabei, Qatada inquired from Janab Saeed ibn Musayyab, the companion of the Holy Prophet, that, “Is belief in Mahdi a factual truth?” When the reply was in affirmative, he further inquired: “From which tribe he will be?” The reply came “from Quraish.” He again asked, “From which branch of Quraish?” The reply was “from Bani Hashim.” Again he asked: “From which branch of Bani Hashim.?” He replied: “From Abdul Muttalib.” Yet again he inquired: “From which branch of Abdul Muttalib?” The inevitable reply was: “From the offspring of Fatema.”

3)      The reappearance of Hazrat Mahdi (A. S.) will be initiated from the Holy Kaabah, in the sacred city of Mecca. There are plenty of traditions in this regard too. While Hazrat Isa (A.S.) will descend from the sky in Eastern Damascus, Syria.

4)      After the descension from the sky Hazrat Isa (A.S.) will pledge allegiance on the hands of
Hazrat Mahdi (A. S.) and will pray namaz behind him. They will converse with each other. Even here traditions are in abundance. The Holy Prophet (S. A.) expressed pride over Hazrat Mahdi (A. S.) on his being from his progeny in these words:

“The man behind whom Isa, the son of Maryam, will pray is from my progeny.”

Keeping all these arguments and proofs in view which are accepted by all Muslims it becomes crystal clear that Hazrat Mahdi (A.S.) and Hazrat Isa (A.S.) are two different personalities and considering them as one is an abjectly illogical conclusion.

The followers of Ghulam Ahmed instead of referring to such firm testimonies and reliable traditions are going after the ambiguous verses and fabricated traditions proving themselves to be among the condemned lot by Quran thus,

“WHOSE HEARTS ARE DEVIATED.”

They quote a tradition from Ibn Majah,

which is regarded as pure fabrication by all the traditionalists of Ahle Sunnah and hence it is ignored by all. The expert in the science of narrators, Hafiz Zahabi has declared it as ‘ dislikeable’.

Ibn Khaldun in his Muqaddamah’, pg. 255, has named it ‘weak’ and ‘uncomfortable’.

The famous traditionalist Mohammad Siddiq Qanauji opined about the tradition that:

“The traditionalists have regarded it as a weak tradition because its draft is unclear and the chain of narrators is not reliable.”

“This tradition is not only weak but it is false, fabricated, mendacious and baseless. It is not such a tradition which can be ascribed to the Holy Prophet (S.A.) or to any of his veteran companions.”

IS THE HOUR OF REAPPEARANCE APPOINTED?

The Qadiani’s have deceptively tried to prove that the reappearance of Hazrat Mahdi (A. S.) will take place in the fourteenth century. Whereas no such date is stipulated regarding the reappearance in the traditions. Only this much is mentioned that he will reappear in the last era before Qiyamat, when this world would be frought with injustice and oppression. A simile has been struck in the traditions between his advent and the arrival of doomsday referring to the abrupt nature of both. Also all those are declared to be vehement liars who stipulate the hour of his reappearance.

“This question pertains to the stipulation of a certain hour of his reappearance. While my father
has narrated from the Holy Prophet (S.A.) that the reappearance of Imam Mahdi (A. S.) is exactly
like Qiyamat which will come at once and all of a sudden.”

In another tradition the Holy Prophet (S.A.) stated that:

“The advent of Mahdi (A.S.) is like Qiyamat, no one knows about its time. Its occurrence will be very difficult and calamitous for the heavens and the earth, it will strike suddenly.”

A narrator asked from Imam Baqir (A. S.),

“Is the time of the reappearance ordained?”

“Those who ordain a time for his reappearance are liars.”

Imam Jafar As Sadiq (A.S.) spoke on another occasion that:

“Those who appoint a particular time for his reappearance are nasty liars. Neither did we appoint a time in the past nor shall we do the same in the future.”

The conclusion drawn from the above mentioned traditions is that no one is aware of the time of the reappearance of Imam Mahdi (A. S.). Also Imams (A. S.) never determined a particular time for his reappearance. Moreover whoever fixes a time is but a liar. His reappearance will be abrupt just like the occurrence of Qiyamat.

IS GHULAM AHMED, MAHDI AND ISA TOO?

Keeping the foregone discussion in view it becomes clear that Hazrat Mahdi (A. S.) and Hazrat
Isa (A. S.) are two separate and different persons. Hazrat Isa (A.S.) will pray namaz in the leader-
ship of Hazrat Mahdi (A. S.) and swear allegiance to him Hence it is definitely impossible that
Mahdi and Isa could be one and the same person. At the most, for the sake of supposition, he may
either be Mahdi or Isa and not both. While Ghulam Ahmed is none of them. He is neither the
promised Mahdi of Islam nor the son of Maryam, Isa, which is more evident because he never claimed that like Hazrat Isa he was born without a father. He cannot be Mahdi even because:-

Now the obvious question is that, “Then what was he?” The answer to this question could be provided by the following tradition of the Holy Prophet (S.A.):