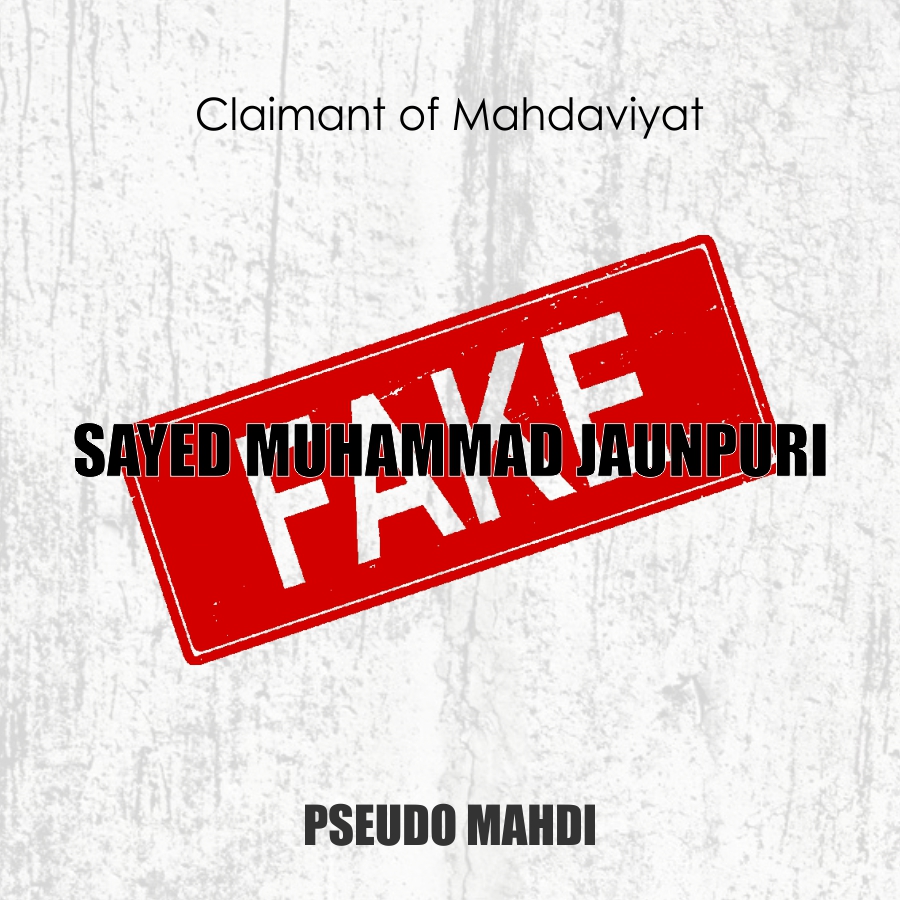 The life of Mahdi Jaunpuri According to the Mahdavi belief Sayed Muhammad Jaunpuri is a descendent of the 7th Imam of the Shias, Imam Musa Kazim (a.s.) in Matla-e-Vilayat of Miya Sayed Yusuf (pg. 7, printed: Hyderabad 1374) and Shawahid-e-Wilayat (pg.29, 30, Hyderabad 1379) his lineage is presented in the following way:

When Sayed Muhammad reached Gujarat , the ruler Sultan Mahmud Begda who was himself a scholar (of Hadees) learned and met Sayed Muhammad personally. After the meeting he refused to grant permission to Sayed Muhammad to halt in Gujarat and acting upon the Fatwa (decree) of religious scholars, sent him to Mecca (hereby exiling him from the country (Rajaatur Rishad by Mulla Abdul Qadar Badayuni).

In the year 901 AH, Sayed Muhammad fled to Mecca, accompanied by 860 followers. The same year he performed the circumbulation of the sacred House and between Rukn and Makaam, announced that he was Mahdi. At this time two of his companions, Shah Nizam and Kazi Alauddin and an Arab pledged allegiance. This declaration is known as his first declaration of Mahdaviyat. He did not stay in Mecca for more than a few months and without going for the Ziyarat of the Holy Prophet (s.a.w.a.) at Medina , he returned to India . He resided in the Taj Khan bin Salaar mosque of Ahmedabad.

In order to prove the authenticity of his claim he re­peated it in Gujarati language (Seerat Imam Mahdi Maood pg. 86, Matla-e-Wilayat pg. 60,)

Along with the declaration he also announced that those who have denied his Mahdaviyat were kafirs’ (disbelievers). Those who deny his Mahdaviyat, have denied all the prophets, the heavenly books, the Quran and ultimately deny in the belief of Almighty Allah.

After this passing through Jaisalmer and Nasrpur, Sayed Muhammad reached Sind. He stayed there for 18 months. The religious scholars of Sind learned of the claim of Sayed Muhammad, appealed to the ruler of Sind,
Jaam Nanda and had a decree issued for the capital punishment of Sayed Muhammad. Ultimately on Monday, the 19th Zilqaad, 915 AH, Sayed  Muhammad bin Sayed Khan Jaunpuri died in the city of  Mizah.

Mahdi of the Quran and Mahdi Jaunpuri

A comparision Now, let us begin the second part of our discussion in which we shall compare the Mahdi of the Quran and hadees with Mahdi of Jaunpuri. It shall be upon the readers to decide for themselves, whether Sayed Muhammad was the true Mahdi or just a false claimant.

But, is the name of the father of Hazrat Mahdi really Abdullah or it is Hasan ibn Ali As we have mentioned before, this part of the tradition is interpolated: “The name of his father shall be the name of my father”. According to famous Ulama, Hazrat Mahdi is the son of Imam Hasan al-Askari. For example, the famous Sunni scholar Sheikh Abdul Wahab Shaarani, who was a Sufi like Sayed Muhammad, writes in his well-known book, “Al-Yawaqeet -wal-Jawahir:-“

“Then one should wait for the reappearance of Hazrat Mahdi. He is the son of Imam Hasan al-Askari. He was born in the year 255 A.H. and he is still alive….” (chapter 65).

The respected personality of Sunnis and the father of Sufism, Sheikh Mohiuddin Arabi writes in his book, Al-Futoohat-el-Makkia, “You should know that the reappearance of Mahdi is imminent. But he will not appear till the world would be completely filled with injustice and oppression. After that he shall come and fill the earth with justice and peace… He is from the progeny of the Messenger of Allah (s.a.w.a.) and Janabe Zahra (s.a.). His respected great grandfather is Husain ibn Ali and his father is Imam Hasan al-Askari.”

The lineage of Sayed Muhammad Jaunpuri has neither been authenticated by any Sunni scholar. nor is it confirmed by any Shia leader.

According to the Mahdavis, Sayed Muhammad Jaunpuri, received education at a young age from Sheikh Daaniyaal Chishti. Although it is an established fact that Hazrat Mahdi has already been given the divine knowledge. Neither would he become the student of anyone, nor would he study in any school or Madresa. Because if anybody is competent enough to impart knowledge and learning to the promised Mahdi, it would mean that he himself is more worthy of being the Mahdi as he is more knowledgeable and learned. Reason dictates that the most learned one should be the leader. The foundation of leadership in Islam rests upon the matter of superiority.

End of injustice and tyranny

It is clearly recorded in the six Sihahs (the six collection of the hadith of Sunnis) that the Holy Prophet (S.A.) said: If only a day remains for the world to end, Allah the Almighty shall prolong that day to such an extent till a man from my progeny, whose name is my name and whose agnomen is my agnomen shall appear. He shall fill the earth with justice and peace like it would be replete with injustice and tyranny.

Note the last part of the tradition says, The Holy Prophet (s.a.w.a.)
has clearly mentioned that Hazrat Mahdi will reappear before the end of this world and he shall fill the world with justice and peace, like it had been filled with injustice and tyranny. In other words it would be the foremost duty of Hazrat Mahdi after his reappearance to eradicate all the strife and tyranny from the face of the earth. Everywhere Islam would reign supreme. The standards of pride, conceit, falsehood, immorality, backbiting and slan­der shall be made to kiss the dust.

A poet has aptly said,” When the Promised one will come, all the fake pomp and show will be rendered useless.”

But, did the coming of Mahdi Jaunpuri cause the earth to be filled with justice and peace Did all the tyranny and injustice vanish from the face of the earth If these queries are put to any intelligent person, he will agree that the situation has further deteriorated. Every where there is nothing but discord. Justice and peace are conspicuous by their absence. The believers, the people of Islam and followers of Quran get nothing but injustice and disgrace. In every corner of the world, massacre of the Muslims is a common phenomenon. In this situation we have only two alternatives either to accept the authenticity of the tradition of Sihah Sitta and reject the Mahdaviyat of Sayed Muhammad Jaunpuri or to accept the Mahdviyat of Sayed Muhammad Jaunpuri and deny the truthfulness of the saying of the Holy Prophet (s.a.w.a.) iv) Signs of reappearance Numerous verses of the Quran and the traditions of the Holy Prophet (s.a.w.a.) mentioned the hap­penings before the advent of Imam Mahdi (a.s.). For example ,”the rising smoke from the sky. the sinking of the ground, Gog and Maggog, the ris­ing of the sun from the west, the advent of Dajjal, all by the Shias and the Sunni scholars in their books. They include Sheikh Tabarani, the author of Mojamul Kabir1 and Ahmad bin Hanbal the au­thor of’Musnad’. Not a single believer could dare to refute the clear verses of the Quran and the opinion of the learned scholars.

Reappearance of Mahdi or the claim of Sayed Mohammed.

The writings of the Mahdavis mention that Sayed Muhammad Jaunpuri claimed Mahdaviyat thrice. The first instance was in the year 901 A.H. when his wife told him that it had been revealed to her that he was the promised Mahdi. Therefore he should convey this message to the people – but Sayed Muhammad declined to make such an announcement. The second declaration was in the year 903 A.H. in Ahmedabad when the religious scholars issued the decree for his expulsion from the city. To this, the reply of Sayed Muhammad was, “I make the divine truth manifest upon you, you shall all be reduced to dust.

The third time was when in the year 905 AH. he declared his Mahdaviyat even though he had been reluctant to do so. But he was afraid that God Almighty may blame him to be more fearful of the people than God Himself. Then, in order to prove the truthfulness of his claim he repeated it in the Gujarati language

Now the question that arises is there such a statement from the Holy Prophet (s.a.w.a.) wherein it is mentioned that the promised Mahdi will make his declaration thrice And repeat it in Gujarati Or why is it when Sayed Muhammad was sent revelation for the first time to declare Mahdaviyat he kept silent and refrained from obeying such an important order.

The abundance of wealth upon the earth The famous Sunni scholar. Allamah Hakim Nishapuri writes in his book ‘Mustadrakus Sahihain’: “In the last period when the reappearance of Mahdi will occur, the world shall be filled with wealth. Poverty will be nonexistent.” After narrating this tradition he says: “The tradition is authentic so far as the reliability of the narrator is concerned.”

This tradition has also been recorded by Ibn Majah in his ‘Sunan’ (chapter on Advent of Mahdi), Hafiz Abu Noaim Isfahani and Shablanji in his book ‘Nurul Absar’.

The readers are requested to judge: Is there no poverty remaining on the earth Could anyone make such a claim No! Because the one who denies reality is either called blind or is a fool. Or shall we declare that we refuse to believe in the sayings of the learned, in the traditions in the clear proofs After presenting all these proofs and after this brief essay we leave the judgement upon you. But while passing let us see what the Holy Quran says regarding the search for truth (O Messenger) Therefore give good new to (My) servants. Those who listen to the words, then follow the best of it…. (Surah Zumar: 17-18)