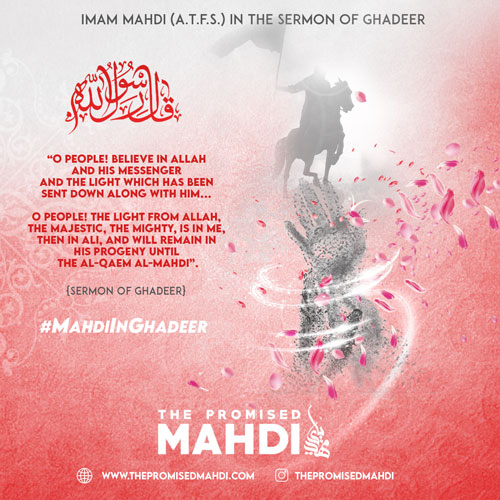 08 Aug The Promised Mahdi (a.t.f.s.) and the sermon of Ghadeer-e-Khum

Posted at 12:54h in Articles, Mahdi In Ghadeer by The Promised Mahdi Team

On the first occasion, he (s.a.w.a.) has driven attention to Imam-e-Asr (a.s.) in the following phrases:

“O people! Believe in Allah and His messenger and the light which has been sent down along with him… O people! The light from Allah, the Majestic, the Mighty, is in me, then in Ali, and will remain in his progeny until the al-Qaem al-Mahdi”.

At the second instance, he (s.a.w.a.) has spoken about 20 phrases on the characteristics of Imam-e-Asr (a.s.).

2. “Know that! Surely, he is the one who will overcome all the religions.”

3. “Know that! Surely, he will take revenge from the oppressors.”

4. “Know that! Surely, he will capture the forts and destroy them.”

5. “Know that! Surely, he is the one who will kill every tribes of the polytheists.”

6. “Know that! Surely, he is the avenger of the blood of every friend of Allah.”

7. “Know that! Surely, he is the helper of the religion of Allah.”

8. “Know that! Surely, he will reap maximum from the deep oceans.”

9. “Know that! Surely, he will indicate the virtue of every virtuous and the ignorance of every ignorant.”

10. “Know that! Surely, he will be the dearest and choicest servant of Allah.”

11. “Know that! Surely, he is the inheritor of every knowledge and is the one who encompasses every understanding.”

12. “Know that! Surely, he is the giver of news from his Lord and is the one who will tell everything about belief in Allah.”

13. “Know that! Surely, he is the one who is of the highest grade (he is most intellectual and wise, and he guides and closes the door of all evils).”

14. “Know that! Surely, he is the one to whom all affairs will be delegated.”

15. “Know that! Surely, he is the one regarding whom the previous nations have given glad tidings.”

16. “Know that! Surely, as a proof of Allah, only he will remain and there will be no proof after him.”

18. “Know that! Surely, he is the one whom none will overcome, and none will be victorious over him.”

19. “Know that! Surely he is the authority of Allah on His earth and His ruler among His creatures.”

20. “He is the trustworthy of Allah in secret and open.”

We delve into the first attribute mentioned in the aforementioned phrases:

“Know that! Surely the seal of the Imams, al Mahdi, is from us.”

The above statement of the Holy Prophet (s.a.w.a.) points us to four attributes of Imam-e-Asr (a.s.).

Here, we would like to clarify that the word ‘khaatam’ mentioned in the Holy Quran does not refer to ‘beauty’, as the Bahais and the Qadianis have interpreted it for Holy Prophet (s.a.w.a.) but it is in fact, the last seal. Hence, the number of the Imams (a.s.) are twelve and Imam-e-Asr (a.s.) is the twelfth one and the last of them, and there will no Imam after him.

One of the titles is ‘al-Qaem’. The word ‘Qaem’, from the perspective of Arabic grammar, is ‘Ism Faael’ (active participle) derived from the root alphabets of ق, و, م, which means ‘to arise’. Hence, ‘Qaem’ means the one who rises. Even though, according to the narrations of Ahle Bait (a.s.), this title is applicable for all the Imams (a.s.), but the uprising of Imam-e-Asr (a.s.) will be unique and universal and will be the greatest uprising in the history of mankind against all forms of injustice and corruption.

In the narrations, various reasons are cited for naming Imam-e-Asr (a.s.) with this title.

“When my grandfather Imam Husain (a.s.) was killed, the angels, in a state of lament, approached Allah. They said: O Lord! Will you be silent on the killing of your chosen servant, who is the son of your caliph? Then Allah revealed to them: I swear by My Might and My Majesty, I will most certainly take revenge from them. Then, Allah introduced Imam Mahdi (a.s.) who will be from the progeny of Imam Husain (a.s.). Then, Allah showed some lights to the angels, while one of them was in the state of standing and was praying. Then Allah said: By that standing one (al-Qaem), I will take revenge from them”

It is recommended to stand up facing the Qiblah when Imam-e-Asr (a.s.) is mentioned with this title of ‘al-Qaem’.

One of the titles is ‘al-Mahdi’. The word ‘Mahdi’, from the perspective of Arabic grammar, is ‘Ism Maf’ool’ (passive participle) derived from the root alphabets of ﻫ, د, ى which means ‘to guide’. Hence, ‘al-Mahdi’ is ‘the one who is guided’. This is one of the most frequently used titles in the traditions and two reasons for this title are mentioned as follows:

“Indeed he is titled as ‘al-Mahdi’ because he has been guided for hidden affairs.”

There is no argument in accepting both the meanings because only the one who is guided can be a  guide for others.

Regarding the ‘hidden affairs’, several interpretations have been done by the scholars.

Here, we would like to point out that despite major occultation and its inherent feature, viz the absence of direct and physical access to Imam-e-Asr (a.s.), the door of guidance is not closed, and those who attach themselves with his holy presence in this period of absence, do achieve guidance and directions from him.

The long era of 1400 years elapsed in a moment, but the sermon of Ghadeer of the Holy Prophet (s.a.w.a.), who said: “Surely I am a trustworthy prophet for you”, that carries a lot of importance, feels like the Holy Prophets (s.a.w.a.) is still announcing it loud and clear and everyone is listening to it. This long era has been accorded as ‘kalamhil basar’ (twinkling of an eye) and is a thought-provoker to the intellectuals. Gradually, the world has reached to such a stage of destruction and devastation that it seems it will be destroyed at any moment and not a soul will survive.

This is the reason why all religions are wailing that a Mahdi will come who will fill this dead earth with justice.

From this perspective, if the people of Islam read the sermon of Ghadeer and judge, then the curtains that have covered their intellect and insight, can be pulled away and they would enter the haven of this faith-enriched valley for whose protection, our Qaem (a.s.) will rise and this world will get a new life through his reappearance.

Allah sent a person to the earth who is the cause of existence of the creatures and the seal of the prophets as a mercy for the worlds. The premise of this mercy, in the sermon of Ghadeer, is the repetition of the word ألا (know that). We are repeatedly reminded that, O those who believe beware now! If after this warning, a person follows his own wish, then he should be aware of its consequences in the world and the hereafter. This warning must be borne in mind in such a way that that people who believe must be steadfast in awaiting the reappearance of the last Imam (a.s.).

We pray to Allah that He increase our recognition of Imam-e-Asr (a.s.) and consider us among the true awaiters of Imam-e-Asr (a.s.); that we remain attached to him till our last breath and follow the instructions of the Holy Prophet (s.a.w.a) in the sermon of Ghadeer, so that we achieve success in this world and hereafter. We hope to be included among his true and sincere followers in this world and amongst his neighbours in the hereafter. Aameen!